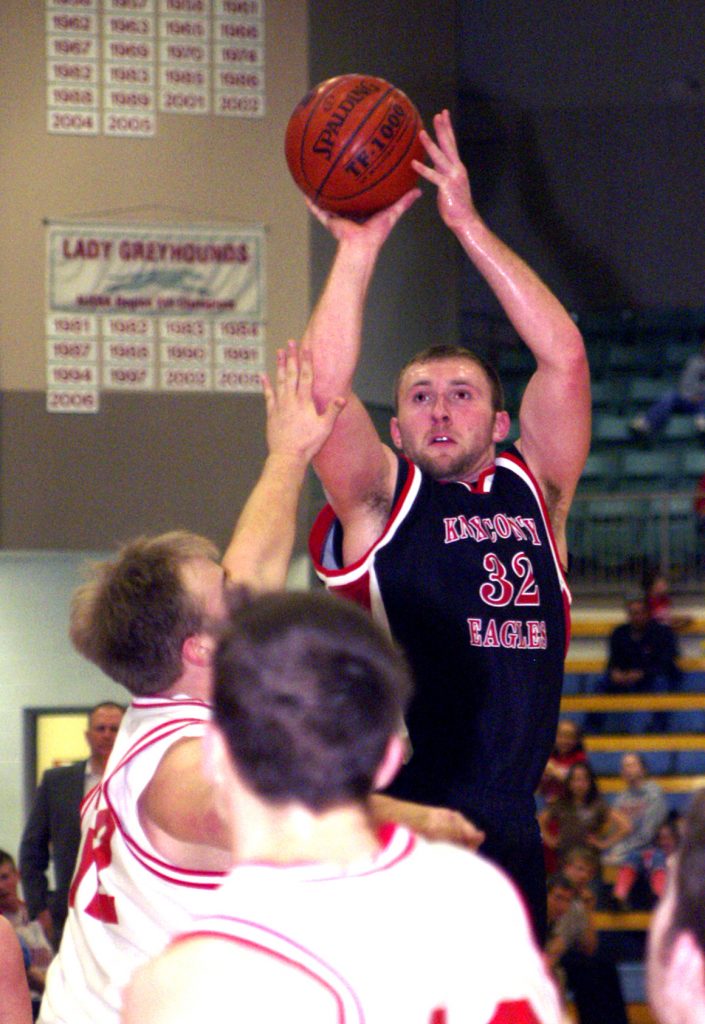 Knox County
supporters sent the Eagles into MSHSAA Class 2 Sectional basketball action with
a siren sounding escort by the Edina Fire Department along with Edina Police
and the Knox County Sheriff’s Department. The scene was much the same in 2008
when the Eagles took Harrisburg to overtime.

Defending state
champion Harrisburg would have none of Knox County’s hopes on March 20, 2009 at
Moberly. The Bulldogs came out ready to play and dashed to a 71-43 victory over
Knox County (20-8).

Harrisburg (25-4,
ranked first in Boy’s Class 2) dominated defensively, refusing to allow the
Eagles to get into their half court offensive sets most of the game. Lightning
quick Frank Warner recorded six of the Bulldog’s 11 steals.

The Bulldogs
caused 20 Knox County turnovers with a smothering defensive effort. Knox County
did not put on their best performance, but played better than the final score
indicated. Harrisburg was simply that good.

“Knox County has a
great program. Coach (Jesse) Crawford does a great job with those guys. They
definitely had our attention tonight,” said Harrisburg coach Steve Combs.

Harrisburg held a
40-29 unofficial rebound advantage at the close of play. The Bulldogs took care
of the basketball with only nine turnovers. Harrisburg held an 11-6 steals
edge. Knox County dished out ten assists, led by Mitchel Penn and Lucas Hudson
with three each. The teams had two unofficial blocked shots each.

The Bulldogs
sprang to a 6-2 lead with 5:33 showing on the first quarter clock. Harrisburg
defenders were all over the basketball and anyone in a black uniform holding
the rock.

The Bulldogs
doubled up Knox County in period one, leading by a 16-8 margin at the first
break. All stater Cory Via rain bowed in a three pointer for a 19-8 lead ten
seconds into the second quarter.

KCHS senior Brett
Wilkerson turned the tables with a steal at the 5:20 mark of the second
quarter. Wilkerson fed classmate Lucas Hudson for a 21-10 Bulldog lead.

Harrisburg steals
and forced turnovers led to the next four unanswered points to a 25-10 lead
with 3:48 remaining in the first half. The Eagles seemed to adjust to their
opponent’s pace and execution in the latter stages of the first half.

Mitchel Penn
trimmed the deficit to 27-14 with free throws at the 2:24 mark. Harrisburg
answered with a 7-3 run to a 34-17 halftime lead. The Eagles were limited to
one shot on most of their first half possessions.

Harrisburg forged
a 23 point third quarter cushion. Dennis Dent buried a three pointer with 1:43
on the clock paring the score to 49-29. The Bulldogs rode second and third shot
opportunities to a 53-31 lead after three quarters of play.

Justin Reeves took
the basketball away from two men at the 4:33 mark of the fourth quarter, down
63-36. Mitchel Penn completed a three point play for a 65-39 deficit with 3:48
showing on the clock.

Knox County’s
coaching staff removed their starters around the 2:43 mark of the fourth
quarter. Senior Dennis Dent came off the court as the Eagle’s career leader in
scoring and rebounds. Dent led the Eagles with 13 points and six rebounds.

Harrisburg
quickness seemed to wear on the Eagles near the end of the game. The Bulldogs
were able to limit touches for Knox County’s interior players. The Sectional
contest marked the second time in 28 tries the Eagles have been out rebounded
this season.

Harrisburg went 14
of 16 from the free throw line. Knox County sank nine of 21 from the charity
stripe. “Their defensive pressure got to us,” commented Knox County coach Jesse
Crawford. “We kind of came out timid in the first quarter and they put the
petal to the metal.”

“We didn’t have
any answer for them. That is a great ball club. A state championship caliber
ball club,” said Coach Crawford. “They exposed us tonight. We didn’t get our
big guy enough touches.”

“This community
has only won two district championships in the last 38 years. Two of them came
from this senior class,” said an emotional Jesse Crawford. “I owe a lot to
them.”

Two time defending
boy’s conference champion Clark County was the other team to beat the Eagles on
the boards this season. The Indians won the January 3. 2009 conference contest
by a 59-40 final score.

“I attribute it to
their strength and relentlessness,” said Crawford of the Bulldog rebounding
effort. “They sent five athletes to the glass. The bottom line is the better
team won. Max Manning is a whale of a ball player. To me, he was their X
Factor. When we would get a bucket, he would answer with a rebound or a lay
up.  I would be hard pressed to find a
Class 2 team that can play with them when they play at that level. They didn’t
even shoot the ball particularly well tonight. The way they rebounded, they are
going to be a tough out for anybody.”

Justin Reeves was
in double figures with 11 points and six rebounds. Mitchel Penn scored nine
points with seven rebounds in his final game as an Eagle.

“We have had a
great run. I think it’s got some of the younger kids in the community wanting
to be hungry,” said Jesse Crawford. “Basketball hasn’t been really prevalent in
Knox County for the last 20 years. That senior class (of 2009) will be
remembered at Knox County High School.”

“What a career
they had. Dennis Dent is a perennial all state player. It is a tough way to go
out. We wanted to give them a little more competition tonight,” said Crawford.
“Kudos to Coach (Steve) Combs and Harrisburg. I hope they can win a state
championship.”