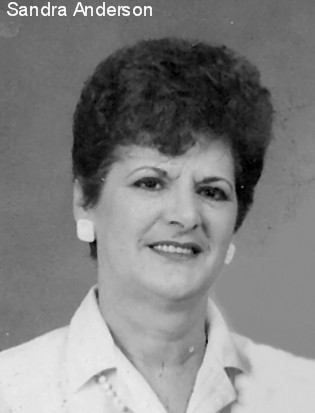 She was born on February 12, 1939 in
Keokuk, IA, the daughter of Leonard and Gladys Bryant Reeves.  On April 16, 1959, Sandra was united in
marriage to John G. Anderson in Elizabeth City, NC.  He survives.

She was preceded in death by her parents,
and two brothers, Larry and William Reeves.

Sandra had been employed at Likes
Jewelers, Drydens,  Denholms IGA and
Zales, all in Keokuk.  She then was
employed as manager of Keokuk Park Apartments for eight years.  Following that she worked at the St. Vincent
School Daycare in Keokuk and retired from there in 2001.

When her children were young, she was
very active in their school activities and served as Homeroom Mom and President
of the PTA.  She enjoyed playing women’s
fast pitch softball, league bowling and playing computer games.  She collected Beanie Babies and dollar bills
with 6’s.  Sandra was a loving wife,
mother and grandmother and was devoted to her family.

Funeral services will be held at 11 a.m.,
Friday at the Vigen Memorial Home in Keokuk, IA with Reverend Shawn McAfee
officiating.  Burial will be in the
Keokuk National Cemetery.

Visitation will be held from 9 a.m. – 11
a.m. on Friday at the Vigen Memorial Home in Keokuk with the family meeting
with friends at that time.