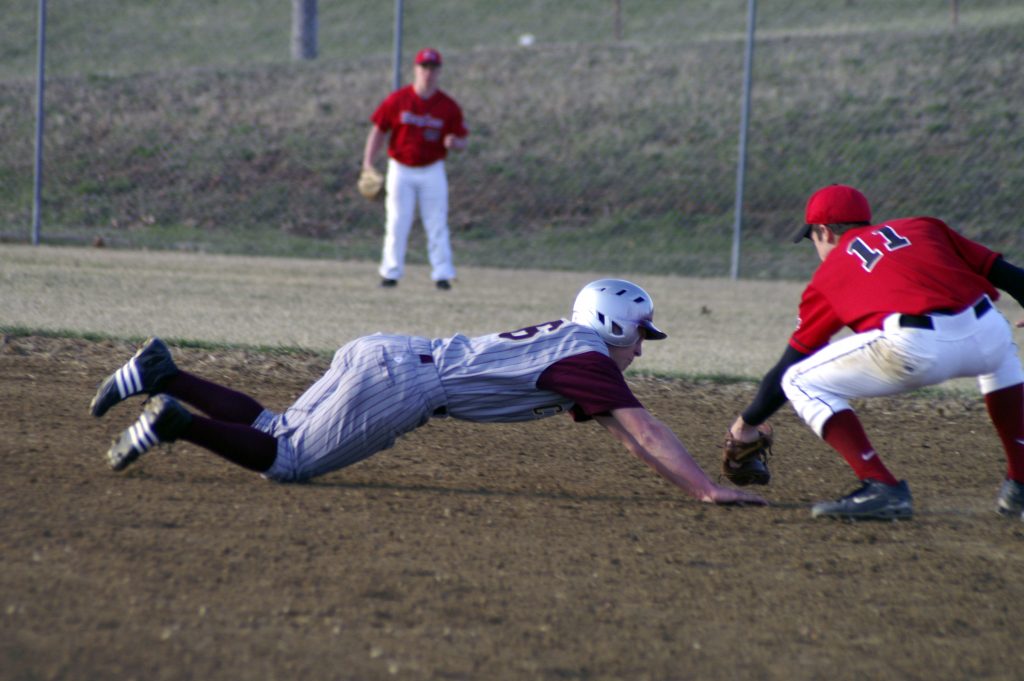 Schuyler County Holds Off Eagles for One Run Win

Knox County
defensive mistakes and timely Schuyler County hitting led the Rams to a 5-4
victory over Knox County (0-2) in April 3, non conference varsity baseball play
at Lancaster. The Rams (1-0) made the most of their scoring chances, while the
Eagles stranded the bases loaded in each of the final three innings.

Parker Dixson drew
a two out first inning walk. Schuyler County freshman catcher Daniel Howe
erased the walk, cutting the runner down stealing to retire the side. Dixson
pitched the first inning with two strikeouts and no runs scored.

The Rams answered
Dylan Morgret’s one out base knock and Matthew McCarty drawing a walk with an
inning ending 6-4-3 twin killing.

Junior Lance
McMahon took the mound in the second inning and finished the game on the hill.
McMahon induced three ground ball outs to Parker Dixson at third base, pitching
around a two out hit by Derek Sayre.

Tristan Lonberger
slammed a Dusty Swedberg delivery for a two out third inning double. Lonberger
moved up on a wild pitch. Brett Wilkerson drew a walk, but was thrown out at
second base trying to steal a run for the final out.

Daniel Howe and
Alex Bruner drew consecutive walks leading off the bottom of the third inning.
Lance McMahon whirled and picked Howe off second base for the first out. Brett
Wilkerson applied the tag for Knox County.

Parker Dixson was struck
by a pitch leading off the KC fourth. Brett Bryant followed with a single.
Dixson moved up and eventually scored on a throwing error, knotting the score
at one.

Consecutive Jordan
Wheeler and Dusty Swedberg hits starting the Ram fourth inning set up a two run
inning. Wheeler advanced on a wild pitch and scored on Swedberg’s RBI hit. An
error prolonged the inning. Daniel Howe blasted an RBI double, after Lance
McMahon fanned a batter for the first out.

The Eagles
prevented further damage, retiring the next two batters in order with Rams on
second and third base. Schuyler County led 3-1 after four innings of play.

The Eagles started
locking on at the plate and stroked three fifth inning hits. Lance McMahon led
off the inning with a walk. Drew Couch and Tristan Lonberger followed with base
hits. Alex Bruner made a key defensive play in right field, digging the
Lonberger hit out of the corner.

Knox County loaded
the bases with none out. The next two batters were retired on infield fly rule
plays. Brett Bryant delivered a two out RBI hit pulling the Eagles within a
run. Dusty Swedberg struck out Dylan Morgret looking for the final out.

The Eagles left
the bases jammed. Schuyler County led 3-2 after five innings of baseball. “We
made some mistakes and allowed a few runs, but we played well overall
defensively,” said Schuyler County coach Steve Stock.

“Gregory Buckallew
made a tremendous catch in center field to start that last inning,” said Coach
Stock. “Our catcher caught a tremendous game. He threw a couple of guys out to
help us get out of innings.” Daniel Howe was 2-2 at bat with two doubles, a
walk a run scored and two runs batted in during his first high school baseball
game behind the plate.

Jordan Wheeler
stroked a two out Schuyler County double in the bottom of the fifth, Tristan
Lonberger made a nice catch pinned against the centerfield fence for the final
out.

Matthew McCarty
drew a walk greeting Schuyler County reliever Jordan Wheeler in the KCHS sixth
inning. Cody Goodwin reached on an infield error. Lance McMahon sacrifice
bunted the runners to second and third base with one down.

Brock Couch drew a
walk, filling the bases with Eagles. Tristan Lonberger drew a bases loaded walk
tying the score at three. The Eagles could not take advantage of their
opportunity when the next two men flew out in order ending the inning with the
bases loaded a second time.

Tyler Weaver drew
a one out sixth inning walk. Daniel Howe put the Rams on top with an RBI
double. Alex Bruner followed with another Ram RBI hit for a 5-3 Schuyler County
lead.

Lance McMahon
retired the next two batters leaving Bruner on third base. Knox County rallied
again in the top of the seventh inning. This time with two out.

Senior Greg
Buckallew robbed Brett Bryant of a possible extra base hit leading off the
seventh inning with a diving catch in right center field. Alex Bruner’s sure
handed catch in right field set down the second man in order.

Pinch batter
Colton Deem drew a walk, loading the bases after a pair of Ram errors put Cody
Goodwin and Lance McMahon on base. Tristan Lonberger battled Jordan Wheeler
with the game on the line.

Wheeler jammed
Lonberger. The junior outfielder took a pitch off his thumb tip swinging at the
baseball for the second strike. Lonberger could not continue. Cameron Morford
inherited a 2-2 two out bases loaded situation as a pinch batter.

Jordan Wheeler
recorded a strikeout on the next pitch, preserving the 5-4 Schuyler County
victory. Wheeler struck out one batter and allowed one hit in two innings
pitched for the victory. Dusty Swedberg allowed six hits in five innings
pitched with three strikeouts.

“If you throw the
ball over the plate and make a few plays you have got a chance to win,” said
Steve Stock. “We don’t have any one guy that is going to come out and dominate
the game. We have a bunch of kids that are going to have to pitch in. We did
that tonight.”

“Alex Bruner had
a big hit (in the sixth inning) that proved to be huge,” Stock said. “Jordan
Wheeler came in as a freshman and got the win on the mound. He threw strikes.
We got out of a bases loaded no out situation. That allowed us to win.”

Brett Bryant and
Tristan Lonberger led Knox County with identical two hits totals in four at
bats with an RBI. Matthew McCarty reached base in all three plate appearances
with a base hit. Lucas Hudson scored twice running for McCarty.

“The heart of the
order kept coming up time after time with runners in scoring position but couldn’t
finish the deal,” said Knox County coach Jesse Crawford. “We are not producing
at the plate. It’s a long season. It’s a grind. We are down right now, but we
are going to get right back up.”

“The ultimate goal
is to get ready for district play. We are getting some guys experience. When
Lance (McMahon) keeps the ball down, he is solid. The defense threw the ball
around and didn’t give him a few breaks. Lance McMahon understands the game. He
has good desire and a good work ethic. We are going to get better.”