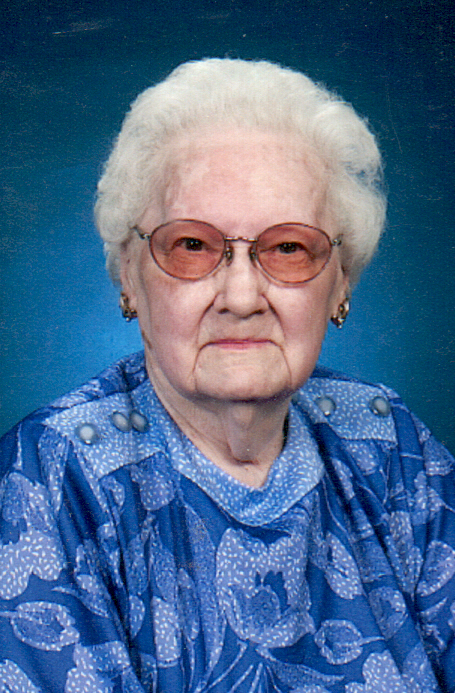 She
was born the daughter of Noah E. and Mamie Cora (Saulsbury) Montgomery on July
9, 1915 in Glenwood, Missouri.

The
family moved from Schuyler County to Scotland County, near Memphis, in 1923,
where they farmed in the Oak Ridge Community.
In March 1938, they moved to the city of Memphis.  She attended the Memphis school and
graduated from Memphis High School with the class of 1932.

Lucille
went to work at the Scotland County Public Library (now Scotland County
Memorial Library) on April 1, 1975, until she retired in November 1990.

She
was a member of the First Christian Church in Memphis.

Lucille
joined the Memphis Rebekah Lodge on June 26, 1959 and was a member until it
closed.  She transferred her membership
to the Jurisdiction of Missouri and it remains there today.

She
was also a member of the Memphis Professional Women’s Club until it closed and
the Memphis Study Club.  She was active
in all these organizations and served most of the offices in these as long as
her health permitted.

Lucille
was blessed in her life to have met and been associated with many wonderful
people, and made many treasured friends among them.  She was an avid reader and loved cats.

She
was preceded in death by her parents, two brothers – one in infancy and Robert,
in 1997.

She
is survived by her sister Audrey Drummond; a niece, Karla Rainey and family;
nephew Kelly Drummond and family; a sister-in-law, Martha Montgomery; nephews
Michael Montgomery and family, Steve Montgomery, and James Montgomery and
family; several cousins; many valued friendships and other relatives.

Online
condolences may be sent to Miss Montgomery’s family via email at gerths@gerths.com.

Arrangements
were under the direction of the Gerth Funeral Service from their Memphis
chapel.