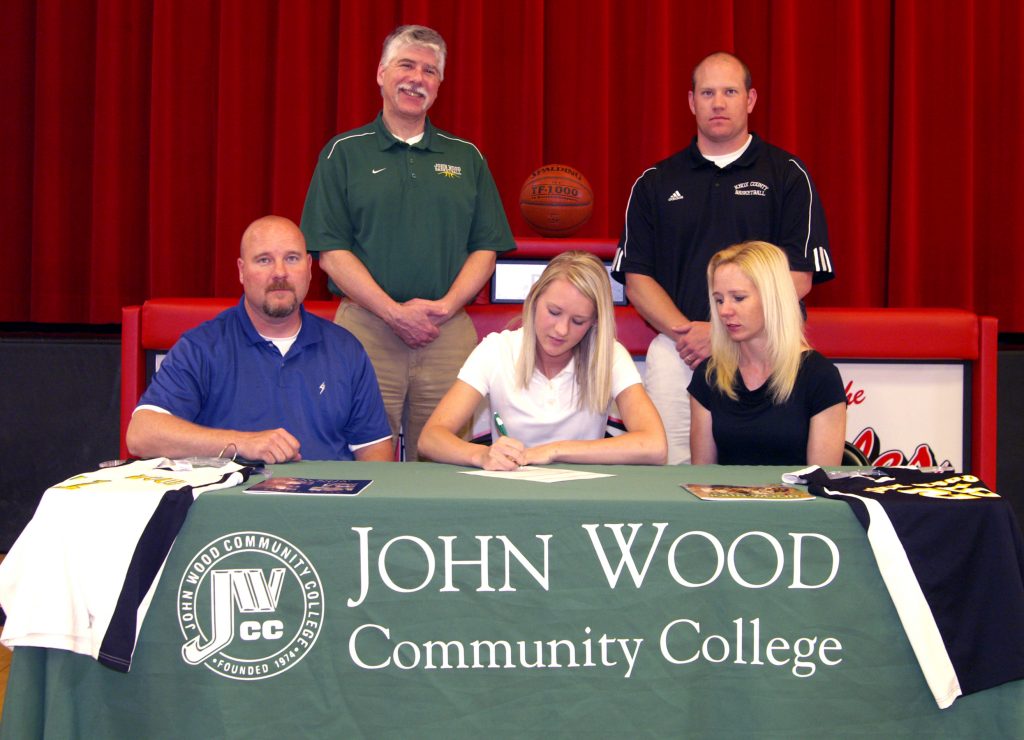 Four-year starter Tessa Ramer has signed a National Letter of Intent to attend John Wood Community College at Quincy, Illinois on a basketball scholarship.
Trail Blazer head coach Norm Rodriguez signed the Tri-Rivers Conference and Missouri Sportswriters’ and Sportscasters’ Association first team all district guard April 23.
Tessa Ramer joins Monroe City post player Laura Williams, Hamilton, Illinois products Halie Schilson and Lindsey Buckert as 2009 JWCC women’s basketball signees. Jessica Walter of Amboy, Illinois and Kelsey Miller of Warsaw, IL have also inked letters with John Wood according to the school web site.
“I feel pretty fortunate,” commented Norm Rodriguez after the commitment was made official. “ I have known about Tessa for quite some time.”
Illinois Basketball Coaches Association Hall of Famer Mike Fray coached the Lady Eagles during Tessa Ramer’s freshman season. That year began the rebuilding process in earnest. The Lady Eagles had their first winning season since the mid 1990’s in 2008-09 and finished tied for second in the conference.
“My assistant coach (Mike Fray) had a hand in her development,” said Rodriguez. “Anybody that he has coached is going to come out with a sound understanding of the game. That has carried on this year (with John Weaver). We are getting a player that is not only fundamentally sound, but understands the game.”
“We need people that can step on the floor and shoot the ball,” said Norm Rodriguez. Tessa Ramer sank 40% of her three point attempts and sinks around 68% from the free throw line after an 80% junior season from the charity stripe.
Ramer brings many intangibles to the table. She is a natural leader with a warrior mentality on the court. “We like to get up and down the court and press a lot. She is athletic and quick,” said the Trail Blazer coach of his latest signee.
“We like to spread the court and attack the basket. Tessa has great hands on defense. She will fit in very well with what we like to do,” said Rodriguez. “One of the reasons we have been so successful is that we have had good kids. Kids that can get it done in the classroom and get it done on the court.”
The Trail Blazers were 23-8 last season in women’s basketball.
“She has worked hard in the off season. This has been her dream all along,” said second year head girls’ basketball coach John Weaver. She is a team player. She is athletic and long. She can run the floor.” Amanda Woods and Tessa Ramer were seniors on the 2008-09 Lady Eagle team.
“We won double digit games last season and had the first winning season (since 1995) this year. She was a huge part of that,” said Weaver. “Before I got here she put in a lot of minutes with a couple of different coaches (Mike Fray and Kenny Jett). She stepped in and was a leader for us. She worked hard. She wants to be the (player) with the ball in her hand in the fourth quarter.”
Tessa Ramer is John Weaver’s first college signee in his high school basketball coaching career. “It’s exciting to see her move on to the next level. I think she is going to do just fine.”
Tessa Ramer joins KCHS graduates Zach Parrish and Daniel McMahon in the JWCC athletic program. McMahon and Parrish are currently playing baseball for the Trail Blazers.
“Ever since I was little I have wanted to go somewhere and play,” said Tessa Ramer. “To get a scholarship to play, that’s even better. I’ve seen people sign before. But the feeling of signing is really awesome.”
Tessa Ramer chose John Wood CC over Westminster College at Fulton and Webster College in St. Louis. “They have a good basketball program and it’s really looking up. I think we are going to be great this year,” said Ramer.
“It’s close to home and the community,” said Tessa Ramer when discussing her reasons for attending John Wood. “They have great academics. Everything they have is great for me.”
“The transition from high school to college is a hard one. You have to do everything a lot quicker,” said Tessa Ramer. “It’s a lot faster, but I think I will be fine.”
“I definitely want to thank my mom and dad. My dad made me get up off the couch Saturday evenings and go to the gym. He was always pushing for me,” said Tessa Ramer of KCHS head football coach and assistant high school Principal Steve Ramer.
“He was always at the side of the court pushing me to do things better. I want to thank my coaches for not letting me slide by. They made me practice like I play. They never took it easy on me for one second. I want to thank my teammates,” said Ramer.
“I wouldn’t be half as good as I am right now if they hadn’t been there helping. My freshman year with Coach (Mike) Fray was so much fun,” said Ramer in response to a reporter’s question of what it will be like to play for Mike Fray again.
“He taught me so much. Not just about basketball,” said Tessa Ramer of Mike Fray. “Being able to learn from him again will be an awesome experience.”