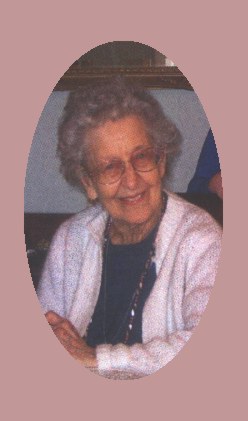 She was born November 14, 1923, the daughter of Lloyd and Marie Seward of
Revere, MO, who preceded her in death.

Survivors include her husband, Richard South, of Chesterfield, MO; a son,
Michael South and his wife, Sarah, of Chesterfield, MO; a daughter, Janet
Fuller and her husband, Braxton, of Los Gatos, CA; four grandchildren: Jason
Munshi-South of New York, NY, Mathew South of Denver, CO, and Michael South’s
younger children, Benjamin and Juliana South of Cheserfield, MO; a
great-grandson, Kiran Munshi-South of New York, NY, son of Jason and Versha
Munshi-South; a sister-in-law, Virginia Rider of Indianapolis, IN; as well as
other relatives.

Verna graduated from Revere High School in 1941 and attended Culver Stockton
College in Canton, MO, where she majored in Accounting. On September 10, 1944,
she was united in marriage to Richard N. South at the home of the bride. Verna
and Richard had previously spent twelve years growing up together as students
at Revere School.

She taught a Sunday school class for several years for younger children at
the Revere Community Church and was also active in the Youth Fellowship
program. She was head bookkeeper for a number of years for the businesses she
and Richard operated, Seward Lumber Co. of Revere, MO and Kahoka Lumber Co. of
Kahoka, MO.

In retirement, Dick and Verna spent many fine years in Revere and each
winter traveled to South Padre Island, TX in their motor home in which they
lived from November to March, enjoying the mild Texas winter. In 2006, Verna
and Richard moved from Revere to Chesterfield, MO to live in the home next door
to their son, Michael.

Funeral services were held Monday, May 4, 2009, at 10 a.m. at the Wilson
Funeral Home in Kahoka with Rev. Goldie Laymon officiating. Special music was
“A Perfect Day” by Mrs. Barb Neyens, vocalist, accompanied by Mrs.
Kathy Wilson.

Visitation began Monday at 9 a.m. at Wilson Funeral Home with family receiving
friends during that time.

Memorials were suggested to the Revere Community Center or the Revere Fire
Department.