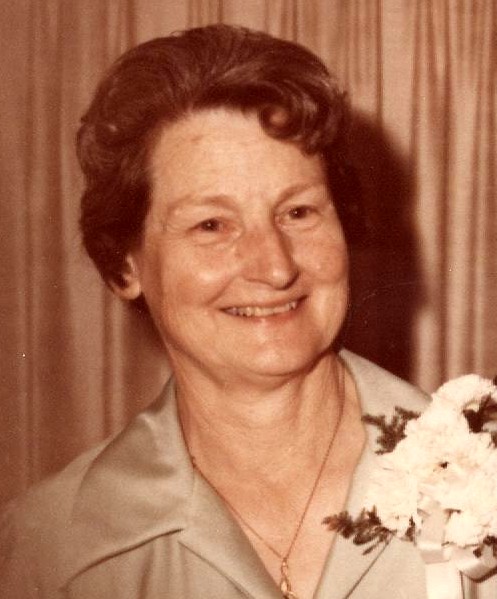 Eleanor Margaret Lee, 93, of Auxvasse, died Thursday, April 23, 2009 at the Boone Hospital Center in Columbia.
She was born February 12, 1916, in Fulton, the daughter of the late Edward Earl and Ellen Rachel (Castle) Mirts. She married Joe A. Lee on Dec. 3, 1932 and he passed away on Jan. 17, 1992.
She is survived by three sons, J. Mike Lee and wife Barbara (Pinson) of Fulton, Edward Lee and wife Jean of Columbia, and John “Bill” Lee and wife Jan of Columbia; seven grandchildren, Debbie Shryock, Denise Kloeppel and Kyle Lee all of Columbia, Brian Lee of New Bloomfield, Robert Lee of Dallas, TX, Rebecca Haarmann of Boonville, and Bill Lee of O’Fallon; three step-grandsons; eleven great-grandchildren and one great-great grandchild. She is also survived by two sisters, Elizabeth Thiele of Arizona and Mildred Jaegar of Knob Noster; and several nieces and nephews.
She was preceded in death by her husband Joe, her parents, one sister Anna Karney, one granddaughter, and two daughters-in-law.
Eleanor and her husband owned the Farmer’s Supply Hardware store in Edina in the ‘50’s. She was a member of the Early Risers Club in Auxvasse and the First Presbyterian Church in Auxvasse. She enjoyed the time spent with her children and grandchildren and especially enjoyed cooking for them.
As a young girl, she was a member of the Court St. Methodist Church basketball team playing as center in the Fulton Sunday School League and was regarded as an outstanding player in the loop. She enjoyed telling her family stories about playing against Helen Stephens.
Funeral services were held at 2:00 P.M., Sunday, April 26, at Debo Funeral Home in Fulton with Pastor Bruce Williamson officiating. Burial followed at the Auxvasse Cemetery.
Online condolences may be sent by visiting www.debofuneralhome.com.