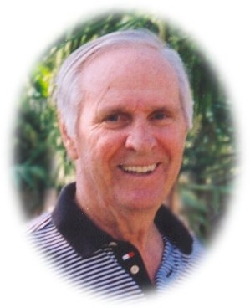 Richard B. “Dick” Kelly, formerly of Edina, Missouri, died Thursday, May 21, 2009 at a hospital in Independence, Missouri where he resided. Dick was born on January 19, 1926 in Quincy, Illinois, the son of Leo B. and Lorraine Berberet Kelly. He was 83 years old.
Dick was raised in Edina, Missouri, and graduated from St. Joseph Catholic School in 1944. Following graduation, he served in the United States Air Force during WWII as a B-24 crewmember. After being shot down over Germany and spending three weeks in the underground, he continued his service completing over thirty missions. He was awarded the Purple Heart.
Dick attended the School of Mortuary Science in St. Louis, Missouri prior to joining his father in the funeral business and farming. He purchased McSorley Lime and Rock in 1960 which then became Kelly Lime and Rock as it was known until recently.
On January 7, 1950 Dick married Cora C. Early, who preceded him in death on January 23, 1991. He married Janet Conley Gushleff in Edina on November 25, 1992.
Dick was a member of St. Joseph Catholic Church, Knights of Columbus, Baring and Edina Country Clubs, Knox County Rotary Club, Missouri Limestone Association, and a charter member of the Knox County VFW. He served on the boards of many of these organizations to which he belonged. He was a current board member of the Citizens Bank of Edina.
Dick is survived by his wife, Janet Kelly of Independence; six children, Patricia and her husband, Richard Lazaroff of St. Louis, Missouri, Kent of Aspen, Colorado, Gary and his wife, Chris of Aspen, Colorado, Joe and his wife, Karla of Denver, Colorado, Kathleen and her husband Mitch Moffett of Golden, Colorado, and Doug and his wife, Traci of Kirksville, Missouri; three step-children, Michael Gushleff of Nevada, Missouri, Andrew Gushleff of Loveland, Colorado, and Jennifer and her husband, Scott Rogers of Kansas City, Missouri; a brother, Larry and his wife Dorothy Ann of Springfield, Missouri, and a sister, Joann and her husband Paul Sigman of St. Charles, Missouri; twelve grandchildren, Kelly and Peter Lazaroff, Christopher, Mark, Katie and Willy Kelly, Christian and Chase Kelly, Melissa and Megan Moffett, and Matthew and Kinsey Kelly; four step-grandchildren, Alex, Claire, Sydney and Blake Rogers; numerous nieces, nephews, cousins and a host of friends.
Dick was preceded in death by his parents, Leo and Lorraine Kelly, his wife, Cora Kelly, and a daughter, Cecilia in infancy.
Funeral mass was celebrated on Tuesday, May 26, 2009 at 11:00 a.m. at St. Joseph Catholic Church in Edina, Missouri.
Burial with Full Military Honors was in the St. Joseph New Catholic Cemetery in Edina, Missouri with the Knox County VFW and American Legion Posts.
Donations in memory of Dick Kelly may be made to the St. Joseph Catholic Church Restoration Fund, the Knox County VFW Post, or a charity of your choice. Memorials may be sent to the Doss Funeral Home at 208 N. Fourth Street, Edina, Missouri 63537.