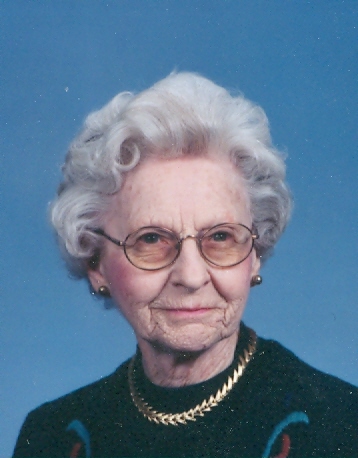 Madlyn Bertram Pennewell, 98, of Hannibal, died Friday, May 29, 2009 at Beth Haven Nursing Home.
Mrs. Pennewell was born Jan. 27, 1911, in Knox County, Misssouri, near Colony, to George and Eva Carder Bertram. She married Marion Earl Pennewell, June 3, 1947, at Edina and he preceded her in death May 19, 1988.
Survivors include dear friends, LeRoy and Vickie Witthaus, of Hannibal, cousins, Vada Granger, of Knox City, Sue Bozarth, of Hannibal, Charlene Brown, of Quincy and Becky Fitzpatrick, of Chesterfield.
Mrs. Pennewell was preceded in death by her parents and a twin sister, Aurolyn Bertram.
Mrs. Pennewell graduated from Edina High School in 1929, and was valedictorian of her class. She received her B.A. from Kirksville Teachers College in June 1934. She served as principal at Wayland High School from 1934-1941. She taught at Eureka High School and from 1942 to 1947 she taught Math at Hannibal High School. She also taught math at Kirksville State Teachers College during the summers of 1934 and 1935.
Following her marriage she was co-owner and manager with her husband M.E. Pennewell of the Mark Twain Dinette in Hannibal. Upon their retirement in 1973 the business was then owned and operated by LeRoy Witthaus who had been a partner with the Pennewells. The Pennewells wintered in Englewood, Florida for several years.
Mrs. Pennewell was a member of the First United Methodist Church and the Mary Magdaline Sunday School Class. She formerly was a member of the Iota Chapter, Delta Kappa Gamma.
Funeral services were 11:00 a.m. Wed., June 3, 2009 at Smith Funeral Home & Chapel. Rev. Helen McFarland officiated. Burial was in Linville Cemetery in Edina.
The Hannibal High School Class of 1944 has established a scholarship in the name of Madlyn Bertram Pennewell Memorial Scholarship Fund. Memorials may be made to the Madlyn Bertram Pennewell Memorial Scholarship Fund or the First United Methodist Church in care of the Smith Funeral Home & Chapel, 2619 St.; Mary’s Ave., Hannibal, MO. 63401.