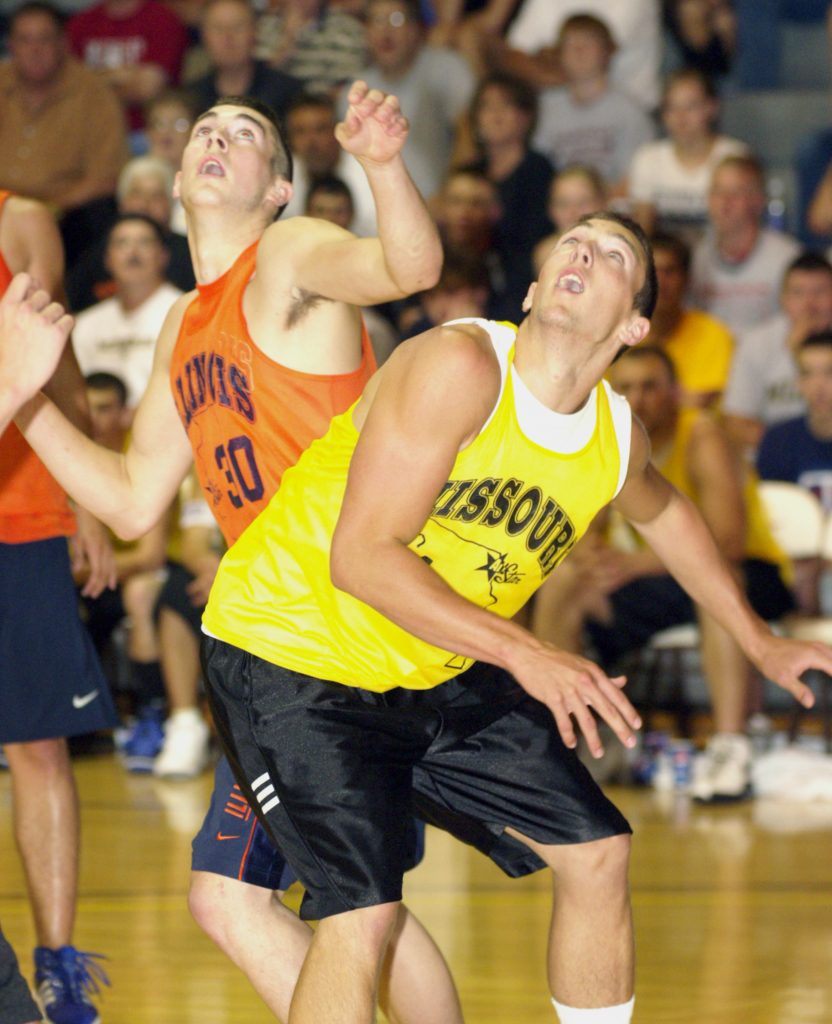 Knox County
forward Dennis Dent and Clark County center Michael Brennan finished their high
school basketball careers the way they played them. Both athletes were a part
of their respective school history.

Brennan and Dent
were part of McDonalds/Quincy Herald-Whig Classic history when the Missouri
All-Stars tossed in a Classic record 12 three pointers and stunned the favored
Illinois team by a final score of 109-90. The Missouri boys won for only the
second time in Classic history on June 13, 2009 at Quincy University’s Pepsi
Arena.

The
McDonald’s/Quincy Herald-Whig Classic is a high school basketball all-star
series featuring graduating seniors from the Herald-Whig coverage area. Boys
and girls’ teams are selected from Illinois and Missouri schools.

Missouri girls’
teams are now 17-10 and the Illinois boys will take a 24-2 mark to the 2010
Classic. Both Illinois teams were physically superior teams. The Illinois side
of the area has a huge population and economic development advantage.

The Missouri
players seemed to take the contest more seriously. Illinois flew out to a quick
6-2 lead. Missouri scored the next five points, taking a 7-6 lead with 17:36
showing on the first half clock.

Illinois
contributed to their demise by settling for jump shots, rather than taking to
the ball inside to their height advantage. John Wood Community College recruit
Will Carr, a 6’9” center from West Hancock HS scored ten points before fouling
out late in the game.

Culver-Stockton
College recruit Mike Hall, a 6’6” center from Central HS took one shot in the
contest and finished with three points. Hall and Zach Wood (Southeastern HS)
fouled out of a chippy game. A total of 59 fouls were called. None of the
Missouri players fouled out of the contest.

The Missouri boys
outscored Illinois 35-24 off the bench.

Missouri took their
share of outside shots. The difference was the often uncovered Missouri
shooters converted their chances into points. Missouri finished the game with a
53% success rate from the field (37-70) and 12-25 (48%) from three point land.

The lane became a
wrestling ring at times. Dennis Dent put Missouri up 13-11 with a baseline
jumper at the 16:10 mark of the first half. Missouri MVP Jonathon Nutt (Palmyra
HS) fired in a three ball seconds later for a 16-13 Missouri edge.

Missouri beat
Illinois down the court twice for Justin Ellison (Canton HS) lay ups and a
20-13 lead. Justin Ellison extended the margin to ten points with a three
pointer around the 13:30 mark of the first half.

Ryne Brewer
(Palmyra HS) capped a 12-2 Missouri run with a bucket with 12:17 remaining in
the first half and a 28-15 Missouri advantage. Illinois shot their way back
into the game, trimming the deficit to three points. Dennis Dent sank a pair of
Missouri free throws for a 34-29 lead with 7:47 to play in the first half.

Michael Brennan
had two blocked shots in the first half. Matt Patterson (South Shelby HS) and
Jonathon Nutt hit big three balls, putting Missouri up 52-35 with around 3:20
to play until intermission.

Zach Wood was
assessed a technical foul after a physical battle under the Missouri basket at
the 2:45 mark. Jonathon Nutt sank a pair of free throws for a 54-35 lead.
Dennis Dent gave Missouri their largest lead of the game with a pair of free
throws. Missouri led 56-37 with 69 seconds to play in the first half.

Shane Wellman
(Quincy Notre Dame HS) scored with 12 seconds remaining in period one, pulling
Illinois back within a 56-40 halftime deficit. Observers wondered if the16
point Missouri lead would stand up given series history.

Illinois tried to
press the smaller, but very quick Missouri ball handlers. Illinois MVP Ryan
Stuckman was assessed fouls attempting to pressure the basketball early in the
second half. Jonathon Nutt extended the Missouri lead to 63-42 with 18:33 to
play in the game.

Illinois drove the
lane and got to the free throw line. Missouri was assessed several reaching
fouls. The Missouri team had several empty possessions early in the second
half.

The Illinois all
stars battled back, closing within nine points several times. Jonathon Nutt
scored a momentum changing Missouri field goal around the 14 minute mark for a
71-60 Missouri lead.

Knox County won
their first boy’s basketball district championship in 37 years.  Dennis Dent would become part of the first
Missouri Boy’s Classic victory since Missouri downed Illinois113-107 in 1988.
The 1971 Knox County boy’s district title and the 1988 Missouri Classic boy’s
win were recorded before any of the 2009 players were born.

“We have been
talking every summer about winning the Classic,” said Dennis Dent about the
long time relationship he has with many of the Missouri players. “Hopefully we
would get to go to the Missouri-Illinois game and break the streak. We really
wanted it. We worked hard this week. We are in the record book.”

“There were
comments made before the game that we didn’t have the size, or we weren’t going
to be as physical as they were,” said the two time Knox County High School all
state basketball star. “When you hear things like that, we said that if they
wanted to play rough we could play rough with you.”

“We just could out
run them,” said the KCHS all time boys’ basketball scoring and rebounding
leader. “We had a lot more speed. We ran to the victory. This feels awesome,”
said Dennis Dent who had the honor of being on the floor at the end of the
game.

Missouri held a
45-41 rebounding advantage when play ended. Missouri led 101-78 with 4:10 to
play in the game. To their credit, the Illinois boys kept playing and fought
back to the 109-90 final score.

“We have had a fun
week,” said Missouri boy’s head coach Matt Thomas of Palmyra HS. “The guys were
fun to work with. We played hard and played together. We kept our cool.
Eventually officials will start to look to get the game under control.”

“Every foul
started going against them, and we made a run. They did not defend us off the
dribble very well,” said Coach Thomas when asked what was the difference in the
game. “Our speed and quickness,” was the response. “They would try to help on
defense, and we found open shooters. They tried to use their bigs inside early.
Our speed and quickness got to them in the end.”

Clark County
graduate Michael Brennan will begin to mix it up with some of the strongest and
toughest young men on the planet when he reports for the start of Missouri
Tiger football practice this fall.

“It feels really
good to be part of the team that broke up a 20 year old winning streak by
Illinois,” said Michael Brennan after playing what likely will be his final
high level competitive basketball game.

“We knew that we
would have a good group of kids coming this year,” said Brennan. “We showed
that we wanted it a little more than they did.”

The Illinois
boys’ team was coached by Marty Hull of Western. Assistants were Kevin Buckert
and Gary Nation of Western. Missouri assistant coaches were Brad Dempsey of
Palmyra and Clint Smith of Clark County.

“The difference in
the game was we kept our composure when they lacked theirs,” said Clint Smith.
“We had a bunch of boys that definitely put we before me. I don’t know if the
other team did and we came out victorious.”

“It seemed like every time a call went the
other way, our kids went to the other end and played that much harder,” said
Coach Smith. “When ever a call went our way, on the other end it was like a
nail in a tire. Every mile you drive down the road that much more air comes
out.”