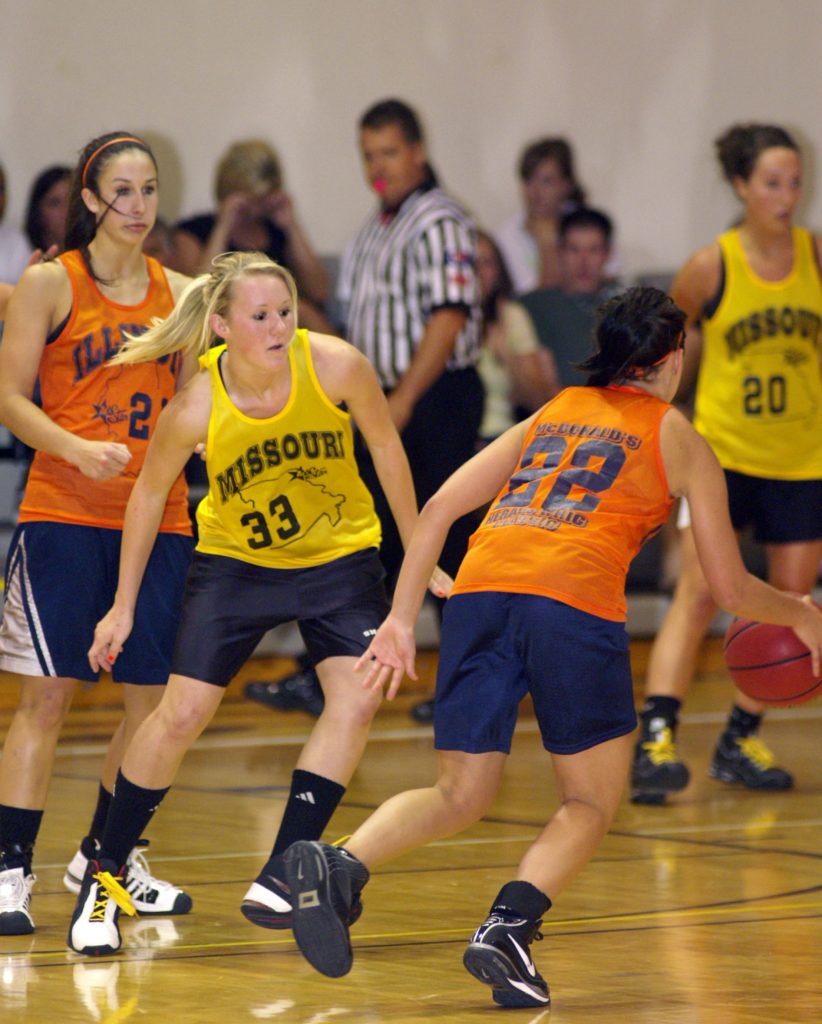 Missouri overcame
a seven point deficit to take a 69-66 victory over Illinois in the girl’s
portion of the 2009 McDonald’s/Quincy Herald-Whig Classic. The June 13, 2009
contests were played at the Pepsi Arena on the campus of Quincy University.

Illinois takeaways
were part of the reason the Illinois all stars led much of the first half.
Tessa Ramer (Knox County HS) buried a three pointer with 13 minutes to play in
the first half for a 13-12 Missouri lead.

Illinois defended
well and cracked off a seven point spurt to a 19-13 lead. Cassie Ferguson
(Pittsfield HS) sank one of seven Illinois three pointers on the night at the
9:10 mark for a 19-13 Illinois lead.

Missouri rebounded
better in the latter stages of the first half and pulled within a 30-27 deficit
when Whitney Buckman (Monroe City HS) sank a Missouri three. Hilary Obert
(Quincy Notre Dame HS) answered with a home run ball about ten seconds later
for a 33-27 lead.

Whitney Buckman
answered a Katelyn Moore (Central-Southeastern HS) three with a field goal late
in the first half, pulling Missouri within a 36-31 Illinois lead at the half.

The
McDonald’s/Quincy Herald-Whig Classic is a high school all star basketball set
comprised of graduating seniors from the Herald-Whig coverage area. Players are
divided into Illinois and Missouri entries.

Illinois came out
and built a ten point lead early in the second half. Tessa Ramer pared the
deficit to 49-42 with a three point goal with 13:58 showing on the second half
clock.

Missouri ran the
court and trimmed the Illinois lead back to 53-50. Kaitln Caldwell (Scotland
County HS) stole the basketball twice. Melissa Cotton (Scotland County HS)
converted an Illinois turnover into a field goal with 10:31 remaining in the
game for the three point Illinois edge.

Things got more
interesting when Chelsea Reutenauer (Hannibal HS) picked up a loose ball and
scored with 4:50 to play in regulation time for a 62-61 Illinois edge.

Danielle Boulware
(Palmyra HS) put back an offensive board for a 63-62 Missouri lead with 4:14
showing on the clock. Illinois missed several outside shots. Chelsea Reutenauer
sank a Missouri free throw for a 64-62 lead.

Illinois MVP Chloe
Barnes tied the game at 64 with 3:36 remaining. The Illinois girls turned the
ball over twice in a 90 second stretch. Danielle Boulware took advantage with a
field goal and a free throw for a 67-64 Missouri lead with 2:18 to play in the
game.

The second
Missouri free throw was waived off on a lane violation. Chloe Barnes sank a
pair of Illinois free throws with 1:19 remaining for a 67-66 Missouri
advantage.

Lindsey Buckert
(West Hancock HS) took a three point shot for the tie with six seconds to play
in the game. The attempt missed its mark. Danielle Boulware pulled down her
seventh rebound of the game for Missouri. Time expired with Missouri winning
the 27th Annual Classic by a 69-66 final score.

“When our MVP has
a total of six points, it shows our team was unselfish,” said Monroe City and
Missouri Classic head girl’s coach Bob Gilliam. “They saw the floor and looked
for each other. For ten girls to come together from eight different schools is
awesome. That’s a credit to them.”

Much like the boy’s
game to follow, Missouri had a much better night from three point land. The
Illinois girls shot themselves out of the game at times, converting only 7-32
(22%) from the arc. Missouri did not give up the ball nearly as often with
their 6-15 (40%) effort from three point range.

The Illinois girls
held a 29-23 edge in points off the bench. Illinois held a 25-21 turnover
advantage and a 15-14 edge in steals. Missouri out rebounded their hosts 48-46.
Illinois held a decided 23-15 advantage on the offensive glass.

Missouri won the
boys game for the first time since 1988 by a 109-90 margin. The Missouri boy’s
victory was only the second in the 26 year old series.