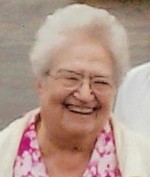 Celestine (Cel) Dorian, age 89 of Troy, Missouri, formerly of Edina, Missouri, died Friday, June 12, 2009, at Troy Manor in Troy, Missouri.
She was born on June 22, 1919, at Slater, Missouri, the daughter of Charles and Josephine (Bange) Metzger.
She was united in marriage to Matthew Dorian and he preceded her in death on July 21, 1997. She was also preceded in death by her parents, her brother Vincent Metzger, and her sister Rita Westhoff.
Surviving are fourteen nieces and nephews.
Mrs. Dorian received her Masters Degree in Special Education and Remedial Reading from Northeast Missouri State University (Truman State University) at Kirksville, Missouri. She retired from teaching after thirty years and the last fourteen years she taught only Remedial Reading in the Knox County Schools.
Cel was a member of the St. Joseph Catholic Church at Edina, Missouri. She served many years as Communion Minister at the Knox County Nursing Home and to shut-ins in their homes. She was also a member of the St. Ann Sodality, Ombudsman Program, Silver Haired Legislature and the American Legion Auxiliary.
Mass of Christian Burial was held 11 a.m. Monday, June 15, 2009, at the St. Joseph Catholic Church at Edina, Missouri. Father Joseph Hoi officiated the services. Music was provided by Brent Karhoff, soloist and Nancy Reardon, organist. Burial was in the St. Joseph Catholic Cemetery. Casket bearers were family and friends.
Memorials may be made to the St. Joseph Catholic Church and may be left at or mailed to, Hudson-Rimer Funeral Home, P.O. Box 1, Edina, Missouri, 63537.
HUDSON-RIMER
FUNERAL HOME