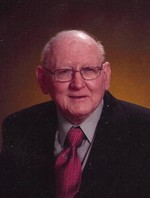 Dr. Thomas Daniel (Doc) O’Brien, Jr., age 84, of Edina, Missouri, died Saturday, June 13, 2009, at the St. Luke’s Hospital in St. Louis, Missouri.
He was born November 8, 1924, at Kansas City, Missouri, the son of Thomas Daniel and Mayme Lockhart O’Brien.
On December 28, 1946, at Quincy, Illinois he was united in marriage to Madelyn Schuering.
Surviving are his wife Madelyn O’Brien of Edina, Missouri; five children, colleen Ann Coram and husband Steve of Kearney, Nebraska, Patricia Ann Sainz and husband Russ of Chesterfield, Missouri, Kathleen Ann Hill of wildwood, Missouri, Terence O’Brien and wife Anne of Lenexa, Kansas, and Daniel George O’Brien and wife Nancy of Normal, Illinois; one brother James W. O’Brien and wife Betty of Dunwoody, Georgia; 16 grandchildren and six great-grandchildren.
Dr. O’Brien was preceded in death by his parents and one son, Timothy O’Brien.
Dr. O’Brien served his country during World War II in the United States Army from 1943 to 1945 during which he earned a Purple Heart.
He was a graduate of the University of Missouri Veterinary School in 1951. Dr. O’Brien began his career in Edina in 1951 and operated the Edina Feed and Livestock store. He was a member of St. Joseph’s Catholic Church in Edina, Missouri.
A Mass of Christian Burial was held at 11 A.M. on Wednesday, June 17, 2009, at the St. Joseph Catholic Church in Edina, Missouri. Father Joseph Hoi and Father Mike Penn officiated the service. Burial was in the St. Joseph Catholic Cemetery.
Memorials may be made to the St. Joseph Catholic Church Restoration Project, the Knox County Nutrition Site or the Charity of the donor’s choice.
Memorials may be left at or mailed to Hudson-Rimer Funeral Home, P.O. Box 1, Edina, Missouri, 63537.