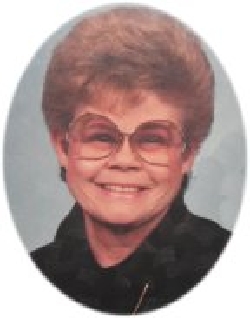 Erma Kathryn Kelley, 84, of Edina, Missouri, died Tuesday, June 23, 2009 at the Northeast Regional Medical Center in Kirksville, Missouri.
Erma was born on February 17, 1925, in Newark, Missouri, the daughter of Henry Hardin “Hal” and Josephine Aileen Janney Marquette.
She lived her entire life in Knox County and attended the Campbell Rural School west of Newark, Missouri and graduated from the Edina High School.
On March 27, 1946, in Kirksville, Missouri, Erma married Charles Robert Kelley and they made their home in Edina, Missouri.
They are members of the Baptist Church, where Erma served as Treasurer of the Church for ten years. She was employed at the Missouri Social Services office in Edina for three and a half years, and she worked as office manager for Production Credit Association for thirty-two years until her retirement. Erma was a dedicated volunteer in the community assisting the American Cancer Society and the American Heart Association.
Erma is survived by her husband, Charles Kelley of Edina, Missouri; a daughter, Joyce Kalayeh of St. Louis, Missouri; a sister-in-law, Mary Marquette of Memphis, Missouri; a nephew, Neil Marquette of Ottumwa, Iowa; two grandchildren, Ryan LeDoux and Azad Kalayeh both of St. Louis, Missouri; some of very special caregivers and dear friends, Debbie and Donnie Crim and Helen Hayes; along with several cousins and a host of friends and neighbors.
She was preceded in death by her parents, Hal and Jo Marquette; two brothers, Glenn Marquette in infancy and Kenneth Marquette in 2008, and a nephew, Stanley Dwayne Marquette in 2008.
Funeral Services were 2:00 p.m., Friday, June 26, 2009 at the Doss Funeral Home in Edina, Missouri. Burial was in the Mt. Salem Cemetery west of Newark, Missouri. Brother Robert Shobe officiated, Pastor Mike Porter assisted, and Rita Waibel and Brent Karhoff provided music. Casket Bearers were Byron Fowler, Ray Drage, Donnie Crim, Donnie Davis, Ryan LeDoux and Azad Kalayeh, along with Honorary Bearers Eric Klocke and Jeff Ausmus.
An expression of sympathy in memory of Erma Kelley may be left to the American Heart Association. A memorial may be left at or mailed to the Doss Funeral Home 208 N. 4th Street, Edina, Missouri 63537.