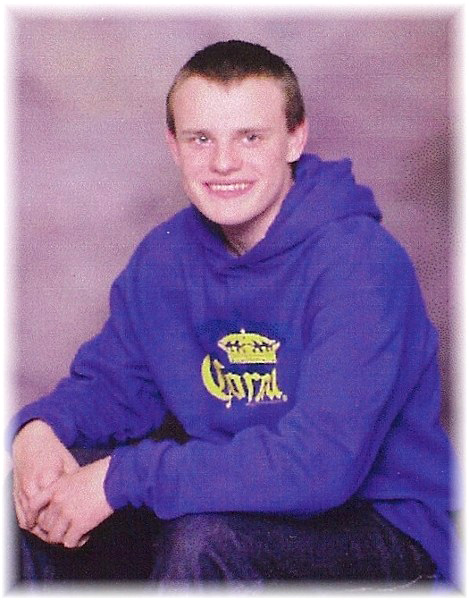 Michael Lee Hobb, 16, of rural Canton, MO, formerly of Keokuk,
IA, died Saturday, June 20, 2009 at his home as the result of a drowning
accident.

Michael loved the outdoors and enjoyed fishing, swimming and working on
cars. He also enjoyed working with his Uncle Jimmie and Uncle Bobby and
spending time and joking around with his Aunt Maxine Hobb and Aunt Tina Bryce.  Michael had a great sense of humor and liked
to joke around with his family and friends.

He is survived by his father and step-mother, Elmer and Candy
Hobb of Keokuk, his mother, Sandra Hobb of Canton, MO, one brother, Jeffrey Hobb
and his girlfriend Tori Green and her daughter Krista of Canton, MO, one
sister, Laurie Castle of Purdee, MO, one half-sister, Bridgette Burnett of
Illinois, his grandparents, Nellie Lamma,
Jim Hobb and his companion Sherlene Duncan , Mary McGee and her husband
Jackie,  Linda Bruce and her companion
Robert Hancock, Sr.  and Martha Brown
all of Keokuk and Jack  Garrett of
Kahoka, MO, his great-grandparents, Rosalee Hobb of Hamilton, IL and Elmer
Burgess of Keokuk, several uncles, nieces, cousins, great-nieces and
great-nephews, and his girlfriend, April Burtlow of Canton, MO.

He was preceded in death by his grandfather Grant Lamma,
great-grandmother Maxine Burgess  and
one sister, Sally Lamma.

Funeral services will be held at
1 p.m., Thursday at the Vigen Memorial Home in Keokuk, IA  with Pastor Craig Burton officiating.  Burial will be on Friday at 10 a.m. at the
Oakland Cemetery in Keokuk.

Visitation will be held after
1:00 p.m. Wednesday at the Vigen Memorial Home in Keokuk with the family
meeting with friends from 6-8 p.m. at the funeral home.