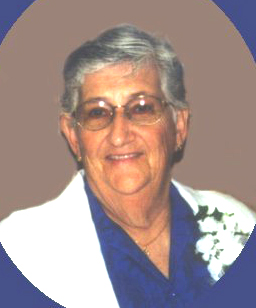 She was born January 12, 1923 near Revere, MO, a daughter of Ovie and Fern
Daniel Hufford.

On June 4, 1942, she was united in marriage to Leroy F. Frazier at the
Methodist Parsonage in Kahoka and had just celebrated their 67th
wedding anniversary.

She was preceded in death by her parents; a granddaughter, Lori Frazier
Gregory; and a sister, Lorena “Jenny” Wilson.

Evelyn graduated from Kahoka High School in 1940 and worked the next several
years at Shaeffer Pen in Fort Madison. When Leroy completed tour of duty in the
service, they began farming north of Luray, where she helped him with many
aspects of farming while maintaining the farm bookwork, a large garden, and
caring for their children.

Evelyn kept very busy with her family and her activities, yet she found time
to plant a large vegetable garden and many flowers. She also enjoyed her birds
and feeders. She was noted for her many poems and stories she wrote, her good
cooking and her sweet disposition. She cared about others and kept a daily diary
and a record of birthdays and anniversaries and would get cards ready at the
first of the month so no one would be forgotten. She truly was a friend to all
who knew and loved her.

Funeral services were held Wednesday, July 1, 2009, at 10:30 a.m. at Wilson
Funeral Home in Kahoka with Rev. Beryl Cragg officiating. Special music will be
provided by Mrs. Bonnie Vineyard, pianist and Mrs. Elaine Forrester, vocalist.
Selections will be “In the Garden” and “God Be With You”. Burial was in Combs
Cemetery at Luray.

Visitation was held after 9 a.m. Tuesday at Wilson Funeral Home with a public
O.E.S. service beginning at 6 p.m. followed by family received friends until 8
p.m.

Memorials were suggested to the Combs Cemetery.

On-line condolences may be sent to
www.timeformemory.com/wilsonfh.