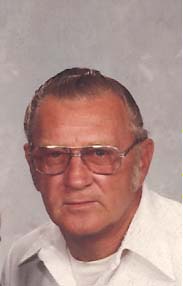 John Henry Mason 79, of Edina, Missouri died Saturday, July 4, 2009, at the Knox County Nursing Home in Edina, Missouri.
The son of Clarance Gordon and Edith Belva (Perrigo) Mason, he was born August 11, 1929 in Knox, County, MO. On June 7, 1947 in Knox County, MO John was united in marriage to Mabel Marie Rhoades, who preceded him in death on August 1, 1992. On June 14, 1997 in Edina, MO he was united in marriage to Joyce A. Harper, who survives.
Also surviving are his son, Bruce Edward Mason and wife, Brenda of Kirksville, MO; his two daughters, Belva Marie Osborn and husband, Ronnie of Kirksville, MO and Kathryn Louise Hicks of Gibbs, MO; one step son Richard Gooden and wife Kim of Oviedo, FL; ten grandchildren and eighteen great-grandchildren.
He was preceded in death by his parents; wife, Mabel Marie, one sister, Hortense Mason Edwards and one step son Carl Anderson
John was reared in Knox County, MO where he attended the rural Cook School and later the Edina schools. He worked as an auto mechanic at Fessler and Cahalan, farmed, had his own lime hauling truck and drove a concrete truck for Marble Concrete. John was originally a member of the Harmony Methodist Church and when it closed his membership was moved to the Edina United Methodist Church.
A funeral service was held at 2:00 p.m. Wednesday, July 8, 2009, at the Hudson-Rimer Funeral Home with Reverend Sam Smith officiating. Burial was in the Novelty Cemetery in Novelty, MO. Pallbearers were Bruce Mason, III, Tom Mason, Ryan Mason, Micheal Osborn, Eddie Hicks, Jr. and John Hicks. Honorary Pallbearers were Kim Lionel Mason, Dwain Perrigo, Richard Clark and Darrell York.
Visitation will be after 3:00 p.m. on Tuesday, July 7, 2009, with the family receiving friends from 6:00 to 8:00 p.m. at the Hudson-Rimer Funeral Home, PO Box 1, Edina, MO 63536.
The family has requested memorials to the Knox County Nutrition Center. Contributions can be left at or sent to the funeral home.