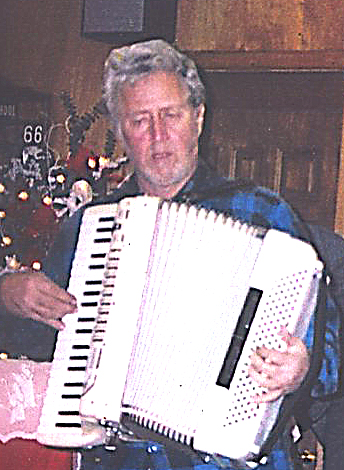 Walter William “Bill” Bloom, age 64, of Luray, MO, died Wednesday, July 22, 2009, at his home.
He was born January 10, 1945, at Rock Island, IL, a son of Richard and Mildred Rosenbaum Bloom.
Survivors include his sister, Ruby (Chuck) Steele of Morning Sun, IA; best friend for over 20 years, Larry Phillips, of Luray, MO; several aunts and uncles, nieces and nephews and other relatives.
He was preceded in death by his parents and a sister, Linda Griffin.
Bill graduated from high school at Morning Sun, IA. He first moved to Luray where he was taken in by Rev. Harold Shelton and family and began playing accordion for his church and entertaining at the nursing homes and other local events. He later joined the Cedar Grove and Luray Baptist churches where he played his accordion almost every Sunday. He was a mechanic and handyman most of his life and a great story teller. Mowing was a form of relaxation and his accordion and music were his therapy and comfort. He and Larry were well known fixtures in Kahoka and enjoyed visiting at Ayerco and local restaurants.
A graveside memorial service was held Saturday, July 25, 2009, at 1 p.m. at the Ashton Cemetery, Ashton, MO, with Pastor Mark Boley officiating. Special music “Mansion Over The Hilltop” was performed by Pastor Boley on the accordion and “Jesus Loves Me” was sung by the Boley children.
Memorials may be made to and left at Wilson Funeral Home.
On-line condolences may be expressed at www.timeformemory.com.