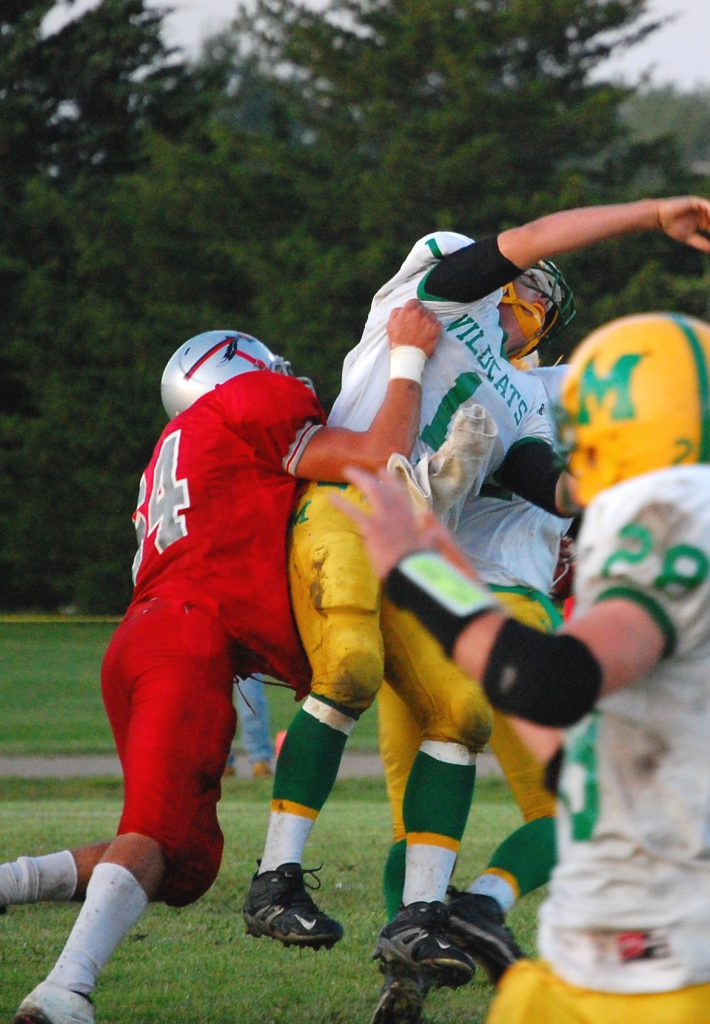 After winning last year’s State Championship in dramatic fashion, there were lots of question about how the Clark County Indians would start their 2009 season.  It didn’t take long for the Indians to answer the question.

Clark County hosted the Milan Wildcats in their season opener on Friday, August 28.  After a day and a half of heavy rain and clouds, the skies cleared just before gametime, and the fans were treated to a wonderful evening of football..

Clark County won the opening coin toss, and elected to defer possession until the second half, allowing Milan to have the ball first.

The Wildcats made a quick first down before the Indians settled down and put an end to the drive, as Justin Oilar nearly intercepted a Milan pass.  The Wildcats were flagged for offensive pass interference, and Clark County got the ball on the Milan 41.

Justin Alderton rumbled down to the 19 yard line on the next play, and scored three plays later on a four-yard run with 7:45 left in the first quarter.  The Indian’s extra point attempt was fumbled, and the Indians took a 6-0 lead.

Milan’s second possession ended as the Indians recovered a Wildcat fumble.  A pass completion to Ryan Whison moved the ball to the 32 yard line, but the drive stalled on the 10-yard line, and the Indians turned the ball over on downs.

Milan moved the ball close to the 36 after a pass interference call on the Indians, but Neal Moons’ hit on Milan’s QB Cooper Bankus as he was throwing the ball ended Milan’s drive.

Ryan Whiston fielded the punt, and returned the kick to near midfield.  A Milan penalty gave the Indians some extra yardage, and Clark County started their third possession on the 37 yard line with 1:28 left in the first period.  The Indians picked up another first down, and then completed a touchdown pass to Jeremy Logsdon.  Adam Sturm’s extra point kick was good, and at the end of the first quarter, Clark County led 13-0.

The Indians scored again in the second quarter, and Mason Ownen raced 45 yards to score with 5:34 left in the half.  Clark County had the chance to score late, driving to the four yard line with one second remaining, but they were stopped short, and took a 20-0 lead into the half.

The Indians took advantage of their first possession of the second half, driving the field and scoring on a Justin Alderton 20-yard run with 10:01 to take a 26-0 lead.

The Indians stopped Milan’s next possession, and got the ball again.  A Zach Alderton pass reception set up a Justin Alderton touchdown run with 6:08 left in the quarter, and the Indians led 32-0.

Justin Alderton would score again, this time on a 40-yard TD pass late in the third quarter to give the Indians a 39-0 lead.

In the fourth quarter, both teams played reserve players, and Clark County would go on to win their opener 39-0.