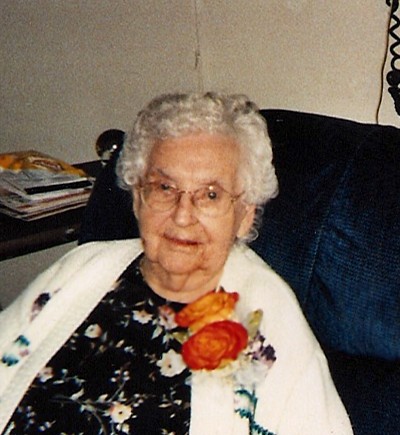 Helen Mathilda Woodard, age 99, of Edina, Missouri, died Thursday afternoon, August 27, 2009, at the Labelle Manor Care Center in LaBelle, Missouri.
She was born April 25, 1910, in Harburg, Germany the daughter of Heinrich and Anna Cruse Koch.
She came to the United States in 1926, and settled in St. Louis, Missouri. She was united in marriage to Carl D. Woodard of February 15, 1930, in St. Louis and they moved to Edina, Missouri where she lived until entering the nursing home in 2007.
Surviving are three daughters, Rose Marie Darnell and husband Virgil of Peoria, Illinois, Geraldine Mathilda Davidson and husband Allen of Edina, Missouri, and Elizabeth Ann Klocke and husband Raymond of Virden, Illinois, three nieces, ten grandchildren, eighteen great-grandchildren and several great-great grandchildren.
Helen was a member of the Baptist Church where she was active in the Choir and WMU organization. She loved to travel and had traveled to all fifty states, some of them several times in her years of traveling.
She also loved to quilt and was a member of the quilting club. At one time she was a cook at the Edina Elementary School.
She was also a member of the Red Hats, charter member of the American Legion auxiliary and loved playing cards and board games.
Funeral services were held 2 p.m. Sunday, August 30, 2009, at the Hudson-Rimer Funeral Home in Edina, Missouri. The Reverend David Howald officiated the services. Burial was in the Linville Cemetery. Music was provided by JoAnn Swanson, organist and Alice Gosney, soloist. Casket bearers were Roger Davidson, Jeff Staples, Pat Woolf, Scott Englert, James Rampy and Gary Rampy.
Visitation was Saturday, August 29, 2009, from 4 p.m. to 8 p.m. in the Hudson-Rimer Funeral Home in Edina, Missouri.
Memorials may be made to the Knox county Nutrition Site, the Knox County Library, or the Older Adults Transportation Service. Memorials may be left at or mailed to Hudson-Rimer Funeral Home, P.O. Box 1, Edina, Missouri, 63537. On line condolences may be left at www.hudsonrimerfh.com
HUDSON-RIMER
FUNERAL HOME