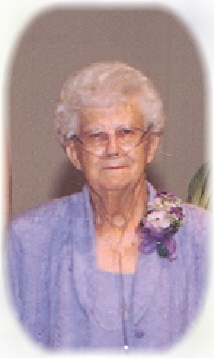 Mary Frances Noble, 81, of Fort Madison, Iowa, died Wednesday, July 8, 2009 at the University of Iowa Hospitals and Clinics, Iowa City, Iowa.
She was born August 15, 1927 at Baring, Missouri, a daughter of John C. and Mary A. (Whalen) Howard.
She married Charles B. Noble on August 30, 1947. He preceded her in death in 1970.
She spent most of her life in Fort Madison. She worked at the Iowa Army Ammunition Plant. She then worked in the litho department at the Sheaffer Pen Company. She was a member of the Alter and Rosary Society, Catholic Ladies Auxiliary and the Passport Club. She was a member of the Holy Family Parish, Fort Madison, Iowa.
She is survived by 3 sons: Charles L. (wife Wilma) Noble, Jefferson, Texas; Larry T. (wife Jamie) Noble, of Shady Shores, Texas; Leo A. (wife Sissy) Noble, of Marshall, Texas; 4 daughters: Karen (husband Rusty) Robbins, of West Point, Iowa; June (husband Niles) Attenberger, of Phoenix, Arizona; Mary (husband Dan) Erenberger, of Solon, Iowa; Nadine (husband Wayne) Meierotto, of Mt. Pleasant, Iowa; 2 sisters: Pauline Dreckmeier, of Burlington, Iowa; Annie Stamper, of Burlington, Iowa;
17 grandchildren; 14 great grandchildren; numerous nieces, nephews and cousins
She was preceded in death by her parents, husband, two sons: Leroy Noble and Ricky Noble, one grandson: Cale Noble one sister: Noema Colyer, and one brother: Johnnie Howard.
Friday, July 10, 2009 at the Barr Memorial Chapel, a Rosary was recited in the afternoon and a Christian Wake Service was held that evening. Mass of Christian Burial was held at 10:30 am Saturday, July 11, 2009 at the Holy Family Parish, Sacred Heart Catholic Church, with Reverend Troy Richmond as Celebrant. Burial was at the Hillcrest Memorial Park Cemetery, Fort Madison, Iowa. A memorial has been established, contributions may be made at the Barr Memorial Chapel or at the church during the service. Online condolences to the Noble Family may be made at the Barr Memorial Chapel website, www.barrmemorialchapel.com Barr Memorial Chapel, Fort Madison was in charge of arrangements.