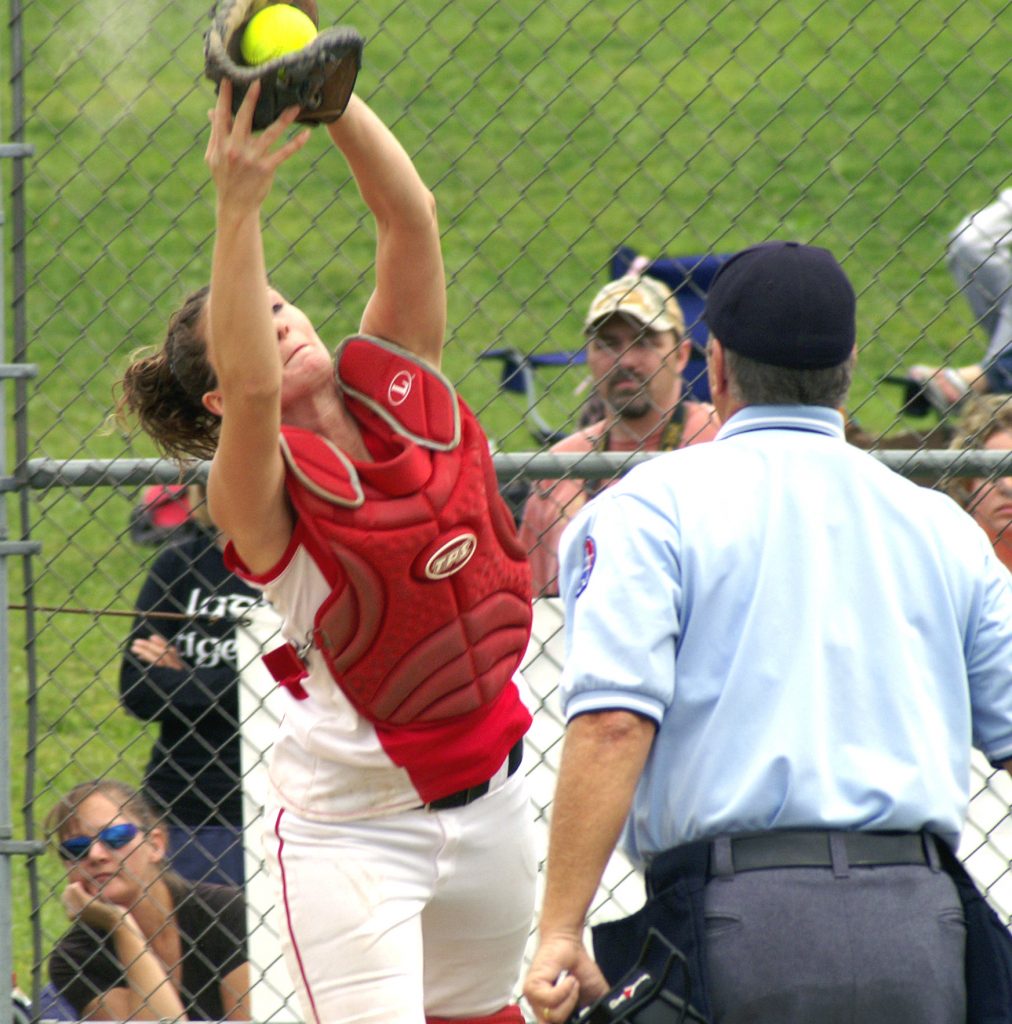 Knox County came out focused and ready to
play in the third place game of the 2009 Knox County Varsity Softball
Tournament.

Lady Eagle coaches and players commented
after the game that they came to win the tournament. Third place was the only
option after eventual tournament champion beat Knox County 5-0 in the
semi-finals.

Brittany Miller launched a three run homer
over the fence and struck out ten batters in five innings, leading Knox County
(5-1) to a 7-4 victory over conference rival North Shelby. The Lady Eagles
scored six times in the fourth inning.

Knox County took a one run first inning
lead when Hannah Dale led off with a double. Dale advanced to third base on a
wild pitch and scored when Devin Gudehus grounded to all stater Olivia Ahern
for out number two.

North Shelby batted around in the bottom of
the second inning, scoring three times. Whitney Otto led off the second inning
with a base hit. Ashton Reitz recorded an RBI single, tying the score at one.
Reitz moved up on an outfield error.

Olivia Ahern followed with a walk.
Returning all stater Mariah Jones reached base on an RBI grounder. Jessica
Linberger stroked an RBI single. Myra Parrish saved a run later in the inning
when she threw to catcher Bailey Couch, retiring Mariah Jones for the second
out. Brittany Miller fanned a batter looking with the bases loaded for the
final out.

North Shelby led 3-1 after two innings of
play. Both sides had third innings hits but failed to score. Brittany Miller
struck out the side after Whitney Otto led off the third inning with her second
straight single.

Senior Brittney Miller centered a Jessica
Linberger fastball, launching a three run homer over the left field fence. “We
have been struggling with the bats,” said Brittney Miller. “I wanted it so bad.
I haven’t been hitting very well. I fouled off the first pitch. When I made
contact, I knew it was going over the fence.”

Lorrie Peters singled followed by Stacey
Leckbee getting on with a fielder’s choice. Hannah Dale belted a two run
double. Myra Parrish plated the sixth Knox County run of the inning with an RBI
base hit for a 7-3 lead.

North Shelby came back in the bottom of the
fourth inning. Mariah Jones singled and scored on Jodi Brumbaugh’s RBI hit.
Jessica Linberger followed Jones’ hit with a North Shelby single. Bailey Couch
threw behind Jessica Linberger, picking off the runner for the second out. Myra
Parrish applied the tag.

Jessica Linberger pitched around two walks
in the KCHS fifth inning with no scoring. North Shelby put two runners on base
in the bottom of the fifth. Olivia Ahern singled with two out, moving Madison
Arnett to second base. Arnett walked with one out.

Brittany Miller fanned two batters and
retired Mariah Jones at first ending the inning. The time limit expired with
Knox County on top of a 7-4 score.

“We had a nice chat after the first game,”
commented Lady Eagle coach Stephanie Crawford. “I think some of the things we
said sank in. They made the adjustment. They came out ready to play.”

“They executed,” said Coach Crawford of the
Lady Eagle effort. “Brittany Miller pitched an excellent game. Our bats came
alive. We had a momentum shift. We have been working on limiting our errors in
the field. Our defense is really coming together. We are still trying to find
an every day lineup to work with.”

“Brittany (Miller) has been in a slump. She
has been getting under everything. Tonight she came through. She dominated on
the mound. She showed leadership on the field a few nights ago with a game
winning hit (against Paris). That’s what we need from our senior leaders. That
kind of domination attitude.”

“We didn’t come here to win third place. We
come to win our tournament every year,” said Stephanie Crawford. “We just
couldn’t get a break this morning. We are happy to have won the third place
trophy.”