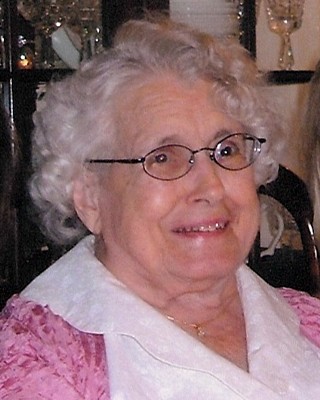 Dorice Mae Doran, age 93, of Sunset Home, formerly of Knox City, Missouri, died Saturday, September 5, 2009, at the home in Quincy, Illinois.
She was born July 20, 1916, in LaBelle, Missouri the daughter of Russell Benjamin and Pearl (Levengood) Stith.
On August 31, 1941, at Canton, Missouri she was united in marriage to J.N. Doran and he preceded her in death on April 20, 2004.
Also preceding her in death were her parents, a sister Kathryn Stith Bergman, a brother Russell D. Stith, and a niece Susan Bunte McLaughlin.
Surviving are four children, Donna Mabry and her husband, Russ of Chattanooga, Tennessee, Jay Doran of Four Seasons, Missouri, Laura Doran of Quincy, Illinois, and Cheryl Da Re and her husband Dino of Placerville, California; seven grandchildren, Russell Mabry and Jennifer Ziomek, Sarah Weirather, Rita Carper, Jason Little, James Doran, Rhonda Henze, ten great-grandchildren, two sisters Norma Stith Vahlkamp and Judy Stith Bunte of Quincy, Illinois and a brother Benny Stith of Rockaway Beach, Missouri, five nieces, four nephews and several great-nieces and nephews.
Mrs. Doran graduated from Lewistown, Missouri High School and later the Quincy Beauty Academy. She opened a Beauty Shop in LaBelle in 1937 and later in her home south of Knox City. Dorice was a major source of love and support for her family and friends.
She was a member of the First Christian Church in Knox City, the PTA of both Knox City and LaBelle schools, LaBelle Garden Club, LaBelle Music Club, and a fifty year member of the LaBelle Order of the Eastern Star. She enjoyed many forms of handwork, gardening, and traveling. She and J.N. enjoyed wintering in Arizona for many years.
The family is comforted by the love, care and support of the staff at Sunset Home through the last three years of her life.
A memorial service will be held at a later date with burial at the LaBelle Cemetery. Arrangements are under the direction of the Hudson-Rimer Funeral Home in Edina, Missouri.
An expression of sympathy in memory of Dorice Doran may be made to Sunset Home (Dorice Doran Beauty Salon Fund). The memorials may be left at or mailed to Hudson-Rimer Funeral Home, P.O. Box 1, Edina, Missouri, 63537. You may also email condolences to www. hudsonrimerfh.com
HUDSON-RIMER
FUNERAL HOME