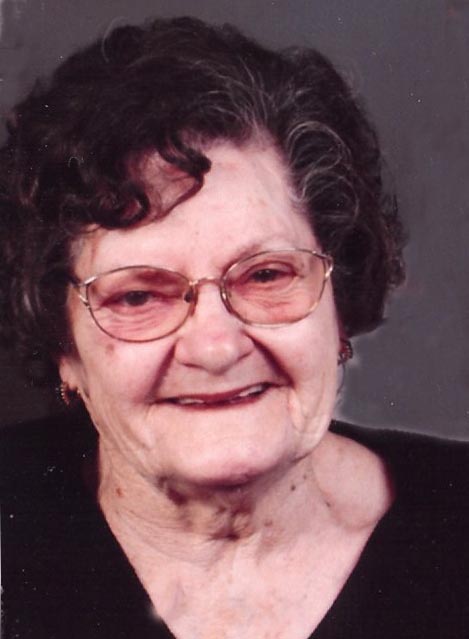 Julia Eveline McCarty, age 84, of Hurdland, Missouri, died Saturday, September 12, 2009, at the Scotland County Memorial Hospital in Memphis, Missouri.
She was born February 21, 1925, at Yarrow, Missouri, the daughter of Robert Fennel and Opal Cleora Waddill Carter.
On November 27, 1941, at Edina, Missouri she was united in marriage to Leonard (Red) McCarty.
Surviving are her husband Leonard of Hurdland, Missouri, one son, one daughter, eight grandchildren and sixteen great grandchildren.
She is survived by her son Leonard Eugene (Gene) McCarty and wife Mary Anella (Ann) of Hurdland, Missouri and their family; Leon McCarty and wife Mary and their son Calvin of Hurdland, Missouri, Robert (Bob) McCarty and wife Carolyn and their children Amanda and Debra McCarty of Edina, Missouri, Matthew McCarty of Edina Missouri, Shane and Emily Clouse, of Hurdland, Missouri, Jeannie Shumate and husband Chris and their daughter Kristen Shumate of Lee’s Summit, Missouri, John McCarty and wife Lisa and their children Randall, Colten and Landon McCarty of Hurdland, Missouri.
Also surviving are her daughter Judy Salter and husband Jim of Ashland, Missouri; and their family; Julia White and husband Marc and their children Marc and Trinity White of Ashland, Missouri, Stacy Salter and wife Emily and their children Carter, Tucker, Parker and Ryder of Ashland, Missouri, Guy Salter and Lafe Salter of Winter Springs, Florida.
She is also survived by two sisters-in-law, Elsie Mayer and Eva McCarty of Hurdland, Missouri and numerous nieces, nephews and cousins.
Eveline received her education in Novelty, Missouri. She was a housewife and homemaker. She and her husband were engaged in farming and lived their entire married life in the Hurdland area. She also enjoyed helping her husband deliver the Kirksville Crier for several years.
She enjoyed cooking, baking, gardening and caring for her animals and livestock. She also enjoyed singing and playing her piano and guitar. She was very dedicated to her family and enjoyed spending time with her children, grandchildren and great grandchildren.
Funeral services will be held at 2 p.m. Thursday, September 17, 2009, at the Hudson-Rimer Funeral Home in Edina, Missouri. The Reverend Robert Shobe will officiate the services assisted by Reverend Nancy Douglas. Burial will be at the Hurdland I.O.O.F. Cemetery.
Musical selections will be “In The Garden”, “When The Roll Is Called Up Yonder”, “Old Rugged Cross” and “Amazing Grace”.
Casket bearers will be Stacy Salter, Guy Salter, Lafe Salter, Marc White, Leon McCarty, Bob McCarty, John McCarty and Chris Shumate.
Visitation will be Wednesday, September 16, 2009, after 4 p.m. with the family receiving friends from 6 p.m. to 8 p.m. in the Hudson-Rimer Funeral Home in Edina, Missouri.
Memorials may be made to the Julia Eveline McCarty Memorial Fund. Memorials may be made left at or mailed to Hudson-Rimer Funeral Home, P.O. Box 1, Edina, Missouri, 63537. www.hudsonrimerfh.com
HUDSON-RIMER
FUNERAL HOME