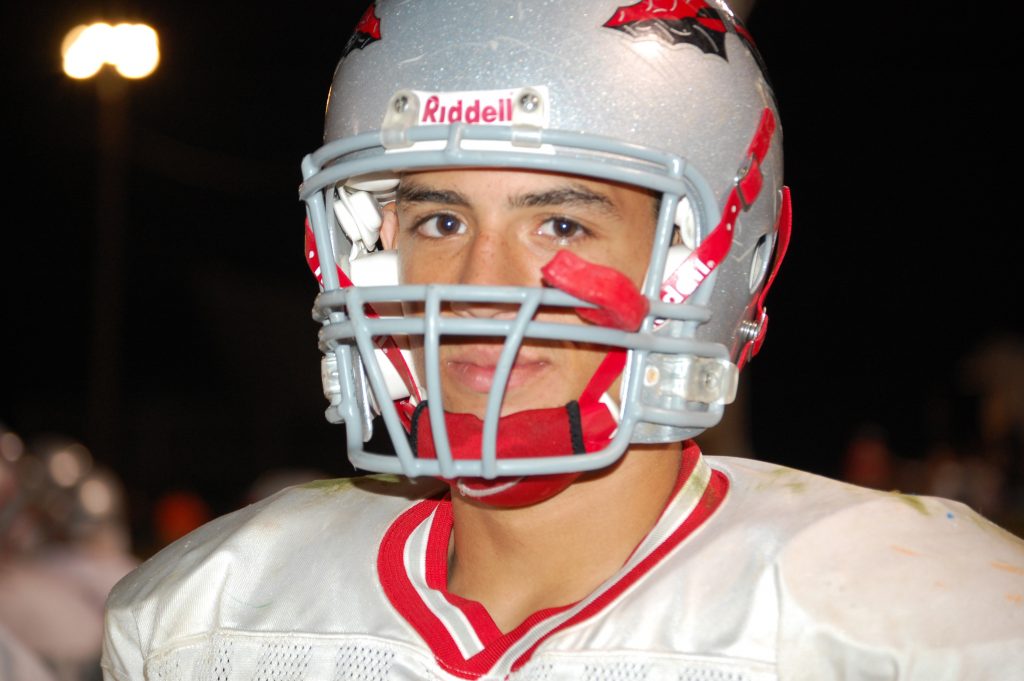 Despite a sea of orange and chants of “Orange and Black
Attack”, the Clark County Indians dismantled the Palmyra Panthers, scoring
early and often, and taking advantage of lucky breaks.  The Big Red effort put a sour note on the
Panther Homecoming

Clark County won the coin toss, and chose to defer to the
second half.  Palmyra took the opening
kickoff to the 35 yard line, but were forced to punt just four plays later,
giving the Indians the ball with great field position just over a minute into
the game.

Justin Oilar connected with Mason Owen on  quick pass to the Panther 15.  A pass completion to Ryan Whiston gave the
Indians a first down inside the five, where Justin Alderton ran it in for the
Indians first touchdown with 8:36 left in the first quarter.

Palmyra’s next drive stopped abruptly as Whiston intercepted
a third and seven pass, giving the Indians the ball again on the 39.  Justin Alderton scored on a 29 yard run to
give Clark County a 14-0 lead at the 7:02 mark.

Palmyra put together it’s first drive of the night, picking
up  first down near midfield before Ryan
Whiston tackled their punter on a fourth and seven punt, giving the Indians the
ball on the Panther 40.  Several
complete passes by Oilar to a mix of receivers got the Indians into scoring
position.  The Indians drove all the way
to the Panther one-yard line before Palmyra held its ground, forcing the
Indians to turn the ball over on downs.

On the very next play, Indian defensive end Jonathan Howren
scooped up a Palmyra fumble in the end zone, and Clark County took a 20-0 lead
with 11:44 left in the first half.

Palmyra’s offense was overwhelmed again by the Big Red D,
and punted the ball away.  Mason Owen
fielded the kick and returned the ball 73 yard to the Panther 15.  Owen caught an Oilar pass on the next play
for the touchdown, and Clark  County
lead 27-0 with 9:37 left in the half.

Palmyra got its only break of the evening as Austin Hinkle
caught the Indian defense off guard, racing 84 yards for a Panther TD, and with
5:21 left in the half, Clark County lead 34-7.

The Indians mounted a long drive late in the half, driving
all the way to the Palmyra four yard line before being force back.  In an unusual situation, the Indians failed
to convert a fourth and nine play, but there were penalties on both teams.  The referees initially gave the ball to
Palmyra on downs, but then gave the Indians the ball back, 4th and 9
at the 15.  Again the Indians took
advantage of their good luck, and Oilar connected with Whiston for the TD, and
the Indians took a 40-7 lead into the half.

Clark County got the kickoff in the second half, but their
offense seemed to lose its focus, and they were quickly forced to punt.  But the Indians quickly got the ball back,
as Howren scooped up another fumble at their own 45.

The Big Red offense still could get moving, and Oilar punted
the ball to the Palmyra one-yard line.

It’s déjà vu all over again.

For the second time in the game, Jonathan Howren recovered a
fumble in the end zone for the TD, and the Indians took a 47-7 lead, which
proved to be the final score