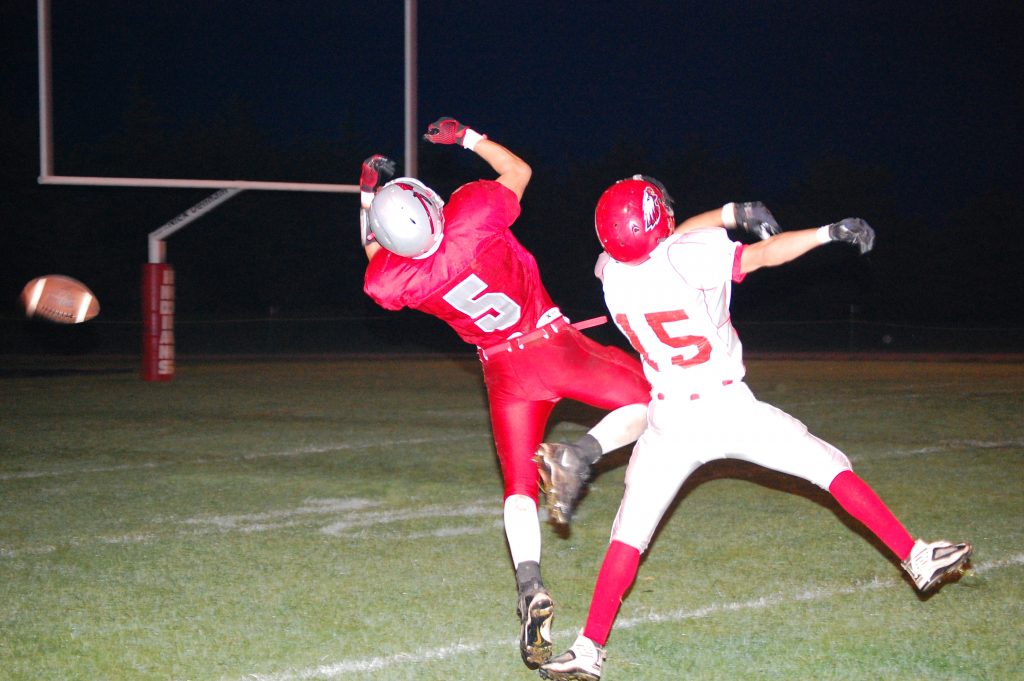 Indians Have No Problem With Knox County

In what will be the final conference match up against Knox
County in football, the Clark County Indians easily downed the Eagles 33-8 at
the CCR-1 Athletic Field in Kahoka.
Next season, the Indians will join the Clarence Cannon Conference,
leaving the familiar Tri-Rivers teams behind.

Knox County won the coin toss and received the opening
kickoff, as Keenan Kite field a short kickoff.
The Eagles started their drive on the 36-yard line, then picked up a
quick first down before Cameron Kirmse got through the Indian line to the
Indian 32-yard line.  But the Indian
defense woke up, stopping the next three carries for losses before recovering a
fumble on a 4th and 15 play.

The Indians got their hands on the ball for the first time
with 6:49 left in the first quarter.
Justin Oilar connected with Ryan Whiston on a third down pass, setting
up a 4th and one quarterback keeper by Oilar for a first down at the
45.  Oilar connected with Zach Alderton
on a diving catch at the 20 for another first down.  Two plays later, Oilar fumbled the ball, but recovered, then
passed to Jeremy Logsdon at the 12-yard line for a first down.  Justin Alderton did the rest with a 12-yard
touchdown run to put the Indians on the scoreboard with 3:42 left in the
first.  The extra point kick was low,
and the score was 6-0.

Clark County’s kickoff rolled out of bounds, so the Eagles
started their next possession on the 35-yard line, but the Eagles could gain
any momentum, and punted the ball after one series of downs.

The Indians started their drive at the their own 40.  Justin Alderton moved the ball to midfield
with a solid run through the middle of the Eagle line.  Next, Clark County took advantage of back-to-back
penalties, a pass interference call against the Eagles, and an unsportsmanlike
conduct call, which gave the Indians a first down deep in Eagle territory.  The Indians know how to take advantage of
good breaks, and Oilar connected with Mason Owen in the end zone for a
touchdown.  The extra point kick was
good, and with 11:53 left in the second quarter, Clark County led 13-0.

Another onside kick gave the Eagles good field position at
the 49 to start their drive.  Knox
County picked up a first down inside Clark County territory, but their drive was
stopped and they turned the ball over on downs.

Clark County’s offense sputtered on this possession, and
after a penalty were forced to punt the ball away, and the Indians downed the
ball on the Eagle five-yard line.

Knox couldn’t move the ball either, and their punt was
blocked by Jonathan Howren, giving the Indians a first down on the Eagle
13-yard line.  Oilar connected with
Jeremy Logsdon in the end zone for another TD.
The kick was good, and the Indians took a 20-0 lead with 3:14 left in
the half.

The Eagles started their next possession at the 25-yard
line.  The Eagles moved the ball to
midfield before turning it over on downs with less than a minute remaining in
the half.  Clark drove to the Eagle 26
before time ran out, and the Indians went into halftime with a 20-0 lead.

Clark County got the kickoff in the second half, fielding
the onside kick at the 47-yard line.
The Indians drive was short-lived as Nathan Goodwin picked off an Oilar
pass, giving the Eagles the ball with 11:50 on the clock.

But luck would not go the Eagles way, and Indian center Neal
Moon picked up a fumble and rumbled 45 yards to score.  The kick was good, and the Indians jumped
ahead 27-0 with 11:28 on the clock.

The Eagles’ Tristan Lonberger had trouble fielding the kickoff,
and Knox started their next drive from their own 14.  Knox County drove into Indian territory with the help of a
facemask penalty and a pass interference call, but then fumbled the ball, which
was recovered by Mason Owen at the 47-yard line.

Clark County drove to the Eagle 13 yard line before Oilar
found Trevor Ray in the  end zone for an
Indian TD.  It was Ray’s first varsity
touchdown, and interestingly, his jersey number is 33, and that equaled the
Indians’ score, 33-0, with 5:59 left in the third period.

The Eagles don’t give up—they just keep playing football,
driving again into Indian territory before being stopped yet again.

Clark County and Knox traded possessions before the Eagles
were able to score in the final quarter.
Knox County took over on downs at the 46-yard line with 6:09 left in the
game.  Dame Hemmerling ran the ball to
the Indian 13, and Keenan Gillaspy carried it to the Indian 5.  Hemmerling put the Eagles on the board with
a 3-yard touchdown run with 1:14 left.
A pass to Kirmse for the two-point conversion was good, and Knox County
trailed 33-8.

The Indians took a knee on the final plays of the game to win 33-8.