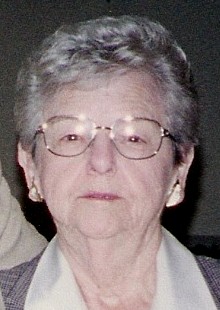 Phyllis Jean Walker, 83, of LaBelle, died Saturday, September 26, 2009. Phyllis was born on April 27, 1926 in Knox County, Missouri to Rob W. Bone and Nellie McReynolds Bone.
On July 29, 1945 Phyllis was united in marriage to Lester Seldon Walker. She lived most of her life in the LaBelle area. She was a graduate of LaBelle High School. She was owner and bookkeeper of the Walker Grocery of LaBelle and Knox City for 38 years and owned and did bookkeeping for the Cable Plowing Inc. of Lewistown. She was a 50 year member of LaBelle Eastern Star. She was also a member of First Baptist Church of LaBelle and was proud to hold one of the longest memberships at this church. Phyllis enjoyed cooking, taking care of her family and most of all being Nana.
She was preceded in death by her parents, husband, son, Maurice, brothers’ Bill Bone and David Bone.
She is survived by her daughter, Diana Scott and husband F.L. of LaPlata; three granddaughters, Julia Darr Scott of St. Louis, Stefanie West and husband Richard of Columbia, and Maranda Ward and husband Robert of Edina; six great-grandchildren, Samantha Darr, Scott and Bradley West, Wesley, Elijah and Mattie Ward: step great-grandchild, Preston Parton; two sisters, Mary Joe Hamilton, Roberta Fishback and husband James (Buster); five sister-in-laws; several nieces, nephews and cousins, and a very special friend Glenn Scoggin.
Visitation will be held Tuesday, September 29, 6:00-8:00pm and the funeral service will be held 2 p.m. Wednesday, September 30th at Coder Funeral Chapel in LaBelle. Services will be performed by the Rev. John Gorham. Burial will be in the Deer Ridge Cemetery North of LaBelle.
Memorials may be made to First Baptist Church of LaBelle and may be left at, or mailed to, the Coder Funeral Chapel, 104 N. Main, LaBelle, MO 63447.