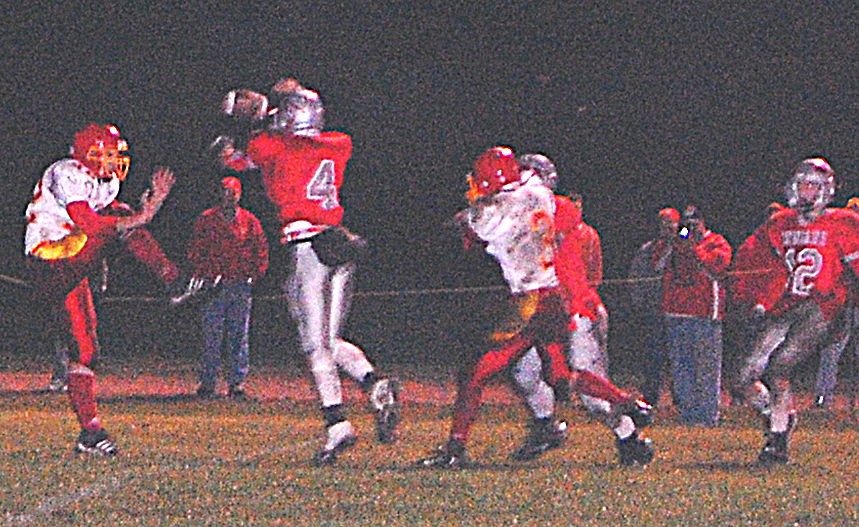 Clark County’s march toward a second state title continued last Friday as the Indians hosted North Shelby.
Clark County is 6-0 in their final Tri Rivers Conference season, and will face Brookfield, who are also joining the Clarence Cannon Conference next year, for the Tri Rivers Conference crown on October 29.
North Shelby caught the Indians asleep on the opening kickoff, returning the ball all the way to the Indian 40 yard line before Grady Small made a touchdown saving tackle.
North Shelby’s surprise didn’t long however, as the Indian recovered a Raider fumble.
Justin Oilar connected with Mason Owen for a big gain to the Raider 25 yard line.  A fumble and a penalty put the Indians ain a second and 23 position before Oilar found Justin Alderton with a pass.  A pass interference call gave the Indians  the ball on the Raider 9, and Oilar scored on a five yard run with 7:31 left.  Zach Nixon’s kick was good, and Clark County took a 7-0 lead.
North Shelby went backwards on their next possession.  A big sack by Neal Moon put the Raiders in a fourth and 26 punting situation, and the Indians started their next possession on the North Shelby 35.
In a one-play scoring drive, Oilar connected with DJ Bunker for a 35 yard touchdown.  The PAT kick was good, and Clark County led 14- with 4:46 remaining in the first period.
North Shelby lost the ball with another fumble on their next possession, but penalties killed the Indian drive and they were forced to put it away.
Two procedure penalties on the Raiders, followed by another Neal Moon sack buried North Shelby deep in their own territory.  Their punt was blocked by Justin Alderton, who picked up the loose ball and scored, giving the Indians a 20- lead with 3:17 left in the first quarter.
North Shelby went backwards again before losing the ball on their own 11 yard line.  The Indians recovered, and took advantage, with Oilar connecting with Ryan Whiston on an eight yard TD pass to give the Indians a 26-0 lead with 8:46 left in the half.
Clark County and North Shelby traded possessions twice before the Raiders intercepted a pass on their own seven-yard line.  Clark County’s defense pushed the back, and forced a safety to take a 28-0 lead.
Clark County took their next possession 65 yards in a little over a minute to score again, capped by Zach Alderton catching a 35-yard TD pass. The kick was good, and the Indians took a 35-0 lead into the half.
A running clock helped players and fans get though a cold second half quickly, and Clark County held on to their 35-0 margin, playing a variety of players in the second half.
The Indians host Macon for Homecoming on Friday evening.