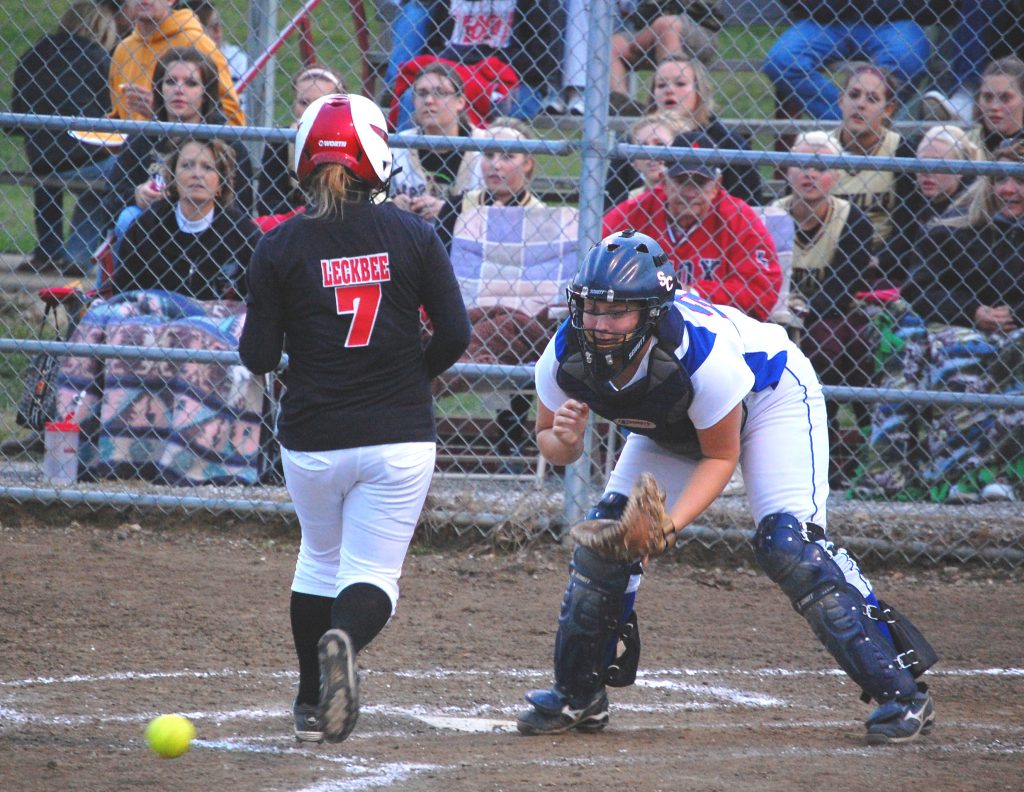 Hannah Dale drove in three Knox County runs while Brittany Miller pitched her third no hit game of the season in an 11-0 whitewashing of Scotland County in first round Class 2 district softball action at Schuyler County.
The October 7 contest saw the Lady Eagles get up off the canvas and score four times in the second and six runs in the sixth inning.
Knox County (12-6) lost a heartbreaking 2-1 game to Canton on the KCHS senior night in the seventh inning their previous outing. “We had a good practice following that Canton game,” said Knox County coach Stephanie Crawford.
“We were mentally prepared. For four years, we have been knocked out of the districts in the first round,” commented Stephanie Crawford. “We have always felt capable of winning. The girls had something to prove when they went out there.”
Kaley Sutton ignited a one out KCHS rally with a second inning hit.  Lorrie Peters followed with a walk. Peters eventually scored on a passed ball.
Second baseman Hannah Dale recorded an RBI hit scoring Kaley Sutton for a one run lead. Bailey Couch followed with a walk off Scotland County starter Megan Creek. Myra Parrish belted an RBI double. Brittany Miller and Devin Gudehus walked.
Megan Creek struck out Kathleen Hinkle for the final out of the inning. Knox County held a 4-0 lead after two innings. Skylar Alderton and Megan Creek drew fourth inning walks. Three ground balls got the Lady Eagles out of the inning unscathed.
See DISTRICT, Page 8
Myra Parrish helped manufacture a run in the fourth inning. Parrish walked, stole second and scored on an error for a 5-0 KCHS lead after four innings. Bailey Couch stroked the first of five consecutive Knox County hits in the bottom of the sixth inning.
Kathleen Hinkle belted a one out, two run single. Lorrie Peters followed with an RBI single. Hannah Dale blasted a two out, two RBI triple. The blast ended the game by the run rule. Knox County advanced to play defending district champion Highland in the semi finals with the 11-0 victory.
Megan Creek struck out 12 Knox County batters with six walks in five and two thirds innings pitched.
Knox County scored 11 runs on 11 hits and one error. Hannah Dale was 2-5 with three runs batted in and a run scored. Myra Parrish was 2-2 with two runs scored, a pair of walks and two RBI’s. Brittany Miller had two hits and a walk coupled with her six strikeout no hitter.
“Brittany (Miller) was phenomenal on the mound. Her pitches worked great. She just had that air about her that she was going to go out and dominate the game,” said Crawford.
“That’s what she did. Megan Creek had 12 strikeouts, but you wouldn’t know it the way we hit the ball up and down the lineup. We just exploded offensively. We ran the bases well and played a great game defensively.”