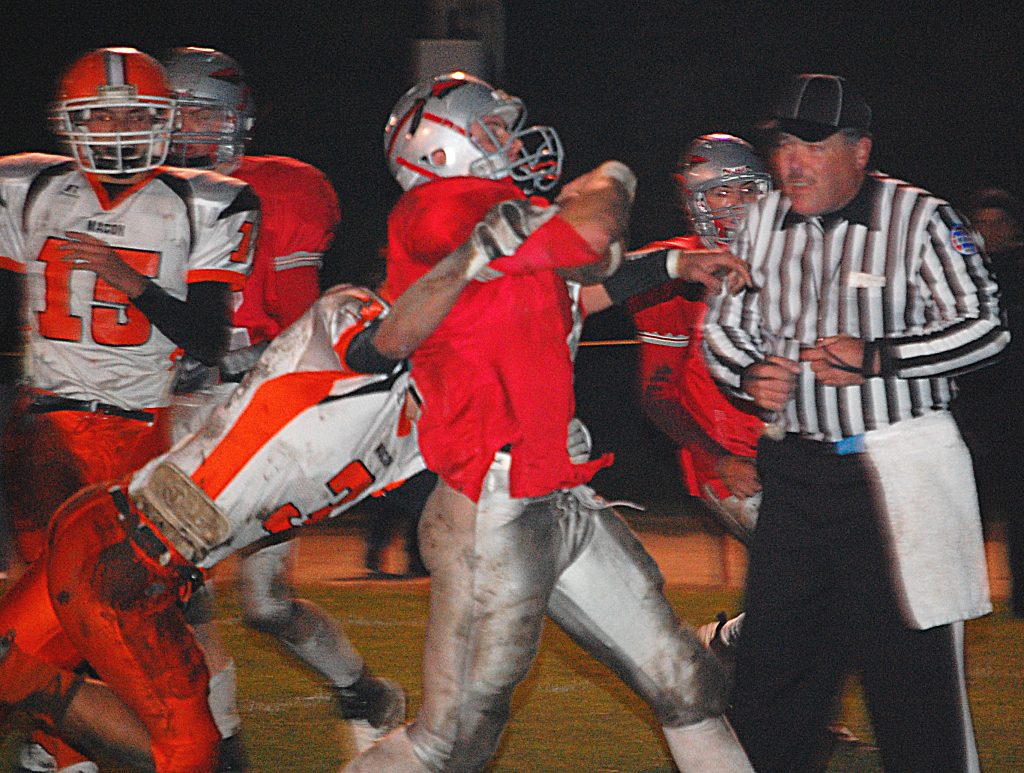 So is that how it’s going to be in the Clarence Cannon Conference next year?
The Clark County Indians extended their winning streak to 23 games with a 35-14 victory over Macon in Friday’s first district game.
Despite a 3-4 start to the season, the Macon Tigers were the strongest team Clark County had faced this season, and actually put more yards of total offense in the book than the Indians did this week.
Macon won the coin toss, and deferred until the second half, giving the Indians the ball first.  Clark County got off to a fast start with Mason Owen returning the kickoff to the Macon 42 yard line. Justin Oilar hit Owen with a pass, giving the Indian a first down on the 17 yard line.  The Indians pounded away at the Tigers, and Justin Alderton got the games’s first score with a 6-yard touchdown run.  Zach Nixon’s PAT kick was good, and with 10:32 left in the first quarter, Clark County took a 7-0 lead.
Macon’s first possession ended in a fumble recovery by Nathan Alderton, giving the Indians excellent field position. But the Tiger defense held its ground, and Clark County turned the ball over on downs at the 16-yard line.
The Tigers mounted a solid drive, breaking the Indian line time and again for five or more yards and driving all the way to the Indian 16 before being pushed back and turning the ball over.
The Indians took over at their 25 yard line, and advance to near midfield before having to punt the ball.
The Tigers started their possession at the 15 and drove into Indian territory before being stopped once again.  After they punted, the Indians started their next drive on their own 3-yard line.  A pass completion to Zach Alderton to the 40 yard line gave the Indians some momentum, and another Justin Alderton run took the ball to the Tiger 5-yard line, where he scored his second TD to give the Indians a 14-0 lead after Nixon’s kick with 4:28 left in the half.
The Indians would score again in the half after Zach Alderton caught a tipped pass and ran to the 5-yard line.  Jeremy Logsdon caught a pass in the end zone to give the Indians a 20-0 lead with 1:31 left in the half.  Nixon’s kick attempt hit the upright.
Macon drove the field for a quick TD at the end of the half, and Clark County held a 20-7 lead at the half.
The teams traded possessions in the third period until the Indians made a mistake.  Justin Oilar threw an interception, giving the Tigers the ball on the Indian 25-yard line.  The Tigers took the ball the distances, and closed the lead to 20-14 with 21 seconds left in the third quarter.
Macon tried an onside kick, which gave the Indians the ball at the 48-yard line.  A pass to Ryan Whiston gave the Indians a first down at the 33, and another pass to Zach Alderton put the Indians in scoring position at the 5-yard line.  Justin Alderton scored on a one-yard run, and the two-point conversion pass to Zach Alderton was good, giving the Indians a 28-14 lead.
Macon would threaten one more time, but the Indian defense proved stronger, pushing the Tigers back into a 4th and 25 situation that came up short.
Clark County burned time off the clock before being forced to punt again with just over four minutes remaining.  The Tigers’ comeback hopes ended when Justin Oilar snatched a Tiger pass to give the Clark County the ball once again.
The Indians kept the ball on the ground for their final possession, capped by Justin Alderton breaking through the Macon defense to score his fourth touchdown on a 27-yard run with 1:00 minute remaining.  The PAT was good, and the Indians won 35-14.
The game was closer than the scoreboard shows.  Macon had a 17-15 edge in first downs, and a 271-269 edge in total offense.
The Indians host Highland this Friday in their second district game.