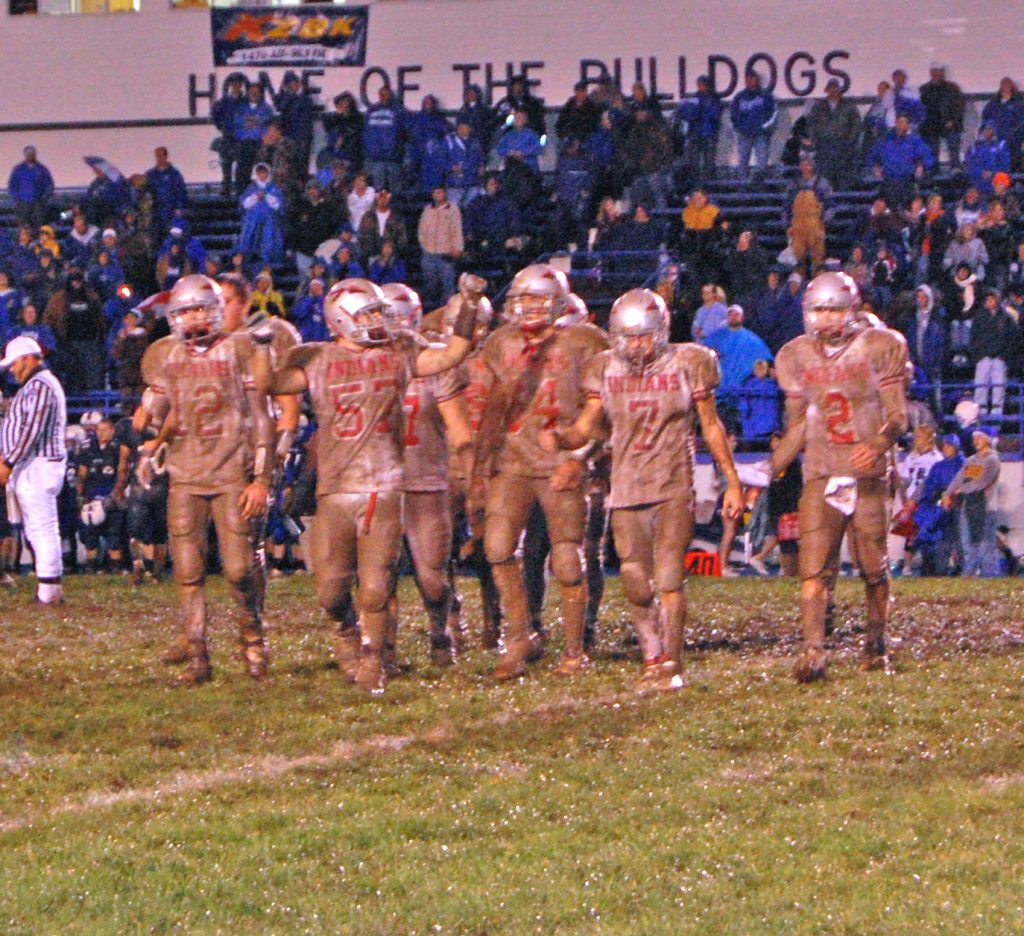 A Brookfield roughing the kicker penalty proved to be the deciding factor in Thursday night’s muddy District and Conference Championship between The Clark County Indians and the Brookfield Bulldogs.  Rain, wind and mud also each played their part in the final outcome.
Clark County improved to 10-0 for the season, and extended their winning streak to 25 games.
The Indians opening kickoff sailed into the end zone, and Brookfield started its first drive on the 20 yard line.  Both teams had problems moving the ball in the mud, and traded possession and punts through most of the first quarter.
Brookfield missed an opportunity late in the quarter after recovering a fumble on the Indian 27 yard line.  The Indian defense stood its ground, with Neal Moon dropping the Bulldog quarterback behind the line, and Mason Owen breaking up a 4th and 17 pass attempt.
The Indians got on the scoreboard first after Owen recovered a fumble at the Bulldog 15 yard line.  Despite a penalty that moved them back, the Indians punched it across the goal line, with Justin Alderton scoring on five-yard carry with 6:59 left in the first half.  Zach Nixon’s extra point kick missed, but Brookfield was flagged for roughing, and the Indians scored on a two-point conversion.
In the second half, the Indians mounted a solid drive deep into Bulldog territory before being turned away.
Brookfield responded with an impressive drive before Clark County stopped them at the 23 yard line.
The Indians next possession went nowhere, and the punt landed in a puddle, eliminating its roll, and Brookfield again had good field position, which they would take advantage of, scoreing on a 10 yard run with 10:27 left in the game.  Their two-point attempt failed, and Clark County held a narrow 8-6 lead.
The Indians responded by driving all the way to the Bulldog one yard line before a fumble killed their hopes .
Brookfield would threaten one more time late in the game, but an interception by Zach Alderton gave the Indians the ball with less than one minute left.
The Indians had 180 total yards, and Brookfield finished with 173 yards of offense.