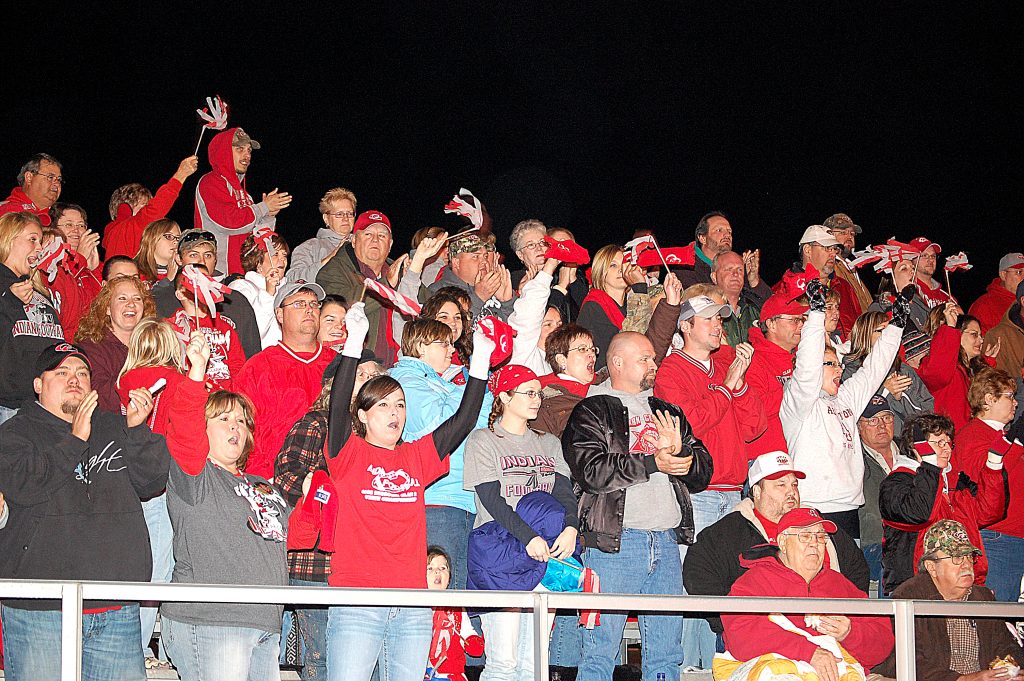 Clark County’s undefeated Indian football team took another step on the road to repeat its 2008 Class 2 State Championship.
On Monday night, November 9, the Indians travelled to Shelbina to face the South Shelby Cardinals.  The Cardinals came into the game with a 10-1 record after dumping Brookfield 34-7 in regional play last week.
The Indians came  into the game with perfect 11-0 record for the season, and a 26 game winning streak.
The Indians won the coin toss and deferred possession until the second half.  Clark County’s defense allowed the Cardinals a pair of first downs before hardening stopping the drive.
The Indians got their hands on the ball for the first time with 5:28 left in the first quarter, starting at their own 34 yard line.  Two quick first downs put the Indians in scoring position, and Justin Oilar connected with Zach Alderton for the game’s first touchdown, an 18-yard catch and run.  Zach Nixon’s point after kick missed, and the Indians took a 6-0 lead with 4:23 left in the first.
South Shelby continued to have some success moving the
ball against the Indian line, but Clark County adjusted and forced the Cardinals to punt again.
This time, however, the Cardinal D held strong, and South Shelby got another break when Justin Oilar’s punt went high and short, giving them the ball on the Indian 48 yard line.
The Cardinals drive the ball to the Indian 26 before turning it over on down.
Clark County answered with a good drive and a long run by Ryan Whiston, giving them the ball on the Cardinal 10 yard line.  The Indians would come away empty handed after a missed field goal attempt.
South Shelby’s next possession sputtered under Indian pressure, and Clark County got the ball back again at their own 26 yard line.  The Indians move d the ball to the 35 before Justin Alderton broke free for a 65 yard scoring run.  A two point conversion attempt failed, and the Indians led 12-0 with 2:48 left in the half.
Clark County’s defense showed what they were made of, holding off a late South Shelby drive, and giving the Indians a 12-0 halftime lead.
Momentum was on the Big Red’s side as they took the ball 54 yards for another TD.  Zach Alderton came up with an important shoestring catch to keep the drive alive, and Justin Alderton brought in home with an eight yard run, give the Indians a 18-0 lead.  Nixon’s PAT kick hit the upright, but bounced through, and Clark County held a 19-0 lead with 8:56 left in the third quarter.
South Shelby charged back with a solid drive of its own, fighting their way to the Indian 33 before being denied on a fourth and six run, giving the Indians ball again.
The Indians wasted no time moving the ball.  An option pitch to Justin Alderton followed by a great run moved the Indians to the Cardinal 27.  Oilar connected with Mason Owen on a touchdown pass completion with 3:54 left in the third quarter.  A two point attempt failed, and Clark County had 25-0 lead.
South Shelby answered with a strong 70 yard scoring drive taking over seven minutes.  The Cardinals dove across the goal line with 8:51 left in the fourth quarter.  A two point attempt failed, and Clark County held a 25-6 lead.
The Cardinals got a big break as their onside kick bounced off an Indian receiver and was recovered by South Shelby.  The Cardinals were able to take advantage of the Indian mistake, scoring again with 6:42 left in the  game, but Clark County still had a 25-13 lead.
The Indians burned time off the clock on their next possession, but South Shelby would drive into Indian territory to threaten again, but the Indian defense wouldn’t allow it, and Clark County got the ball back on downs with just 50 seconds remaining in the game.
The Indians celebrated an impressive 25-13 victory over a very good South Shelby team.
Clark County will now face Centralia on Saturday, at the Clark County Activity Field in Kahoka.  Game time is 1:30 pm.
Centralia advanced into the quarterfinal matchup against the Indians with  56-8 win over Blair Oaks.