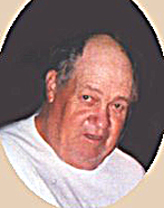 Louis W. “Joe” Swank, age 68, of Revere, MO, died Saturday, November 14, 2009, at his home.
He was born June 30, 1941, in New Cambria, MO, a son of Harry and Evelyn Fields Swank.
He had been married to Ruth Elwell and they were the parents of a son, Wesley.
Survivors include his son, Wesley P. Swank and his wife, Freda McGee of Lenoir, NC; one grandchild, Alexis McGee of Lenoir, NC; one brother, Wilfred Swank and his wife, Carol, of Keytesville, MO; a sister, Frances McAdams and her husband, Dean, of Brookfield, MO; as well as several nieces and nephews and their families.
He was preceded in death by his parents; a brother, Bob Swank; and a sister, Dorothy Sagaser.
“Joe” graduated from New Cambria High School and served in the U.S. Army during the Vietnam War. He was a member of the American Legion Post #57 at Bucklin, MO.
He had been employed by the Santa Fe Railroad as a switchman and brakeman most of his adult life until health issues made it necessary for him to retire. He also farmed and loved gardening, canning, and tinkering with his machinery. He enjoyed keeping up with area auctions and attending them to see what things were selling for. He also loved fishing and deer season, particularly for the fellowship with the hunters who visited.. He appreciated time spent with his friends and family and had just returned from a three month stay with his son and family.
Funeral services were held Wednesday, November 18, 2009, at 10 a.m. at Wilson Funeral Home in Kahoka with Rev. Goldie Laymon officiating. Special music was “The Old Rugged Cross” recorded by Allan Jackson.
Honorary pallbearers were: Rex Teel, George Regennitter, Eldon Hopp, Stan Elwell, Wes Laymon, V. J. Christy, Gary Whitaker, Guy Barrows, Brian Elwell, Bill Elwell, and Rob Elwell.
Burial and military rites were held at the New Cambria Cemetery in New Cambria, MO.
Visitation was held Tuesday between the hours of 9 a.m. and 5 p.m. at Wilson Funeral Home with family greeting friends Wednesday from 9 a.m. until time of services.
Memorials were suggested to the Revere Community Center or the Revere Fire Department.
On-line condolences may be expressed at www.timeformemory.com/wilsonfh.