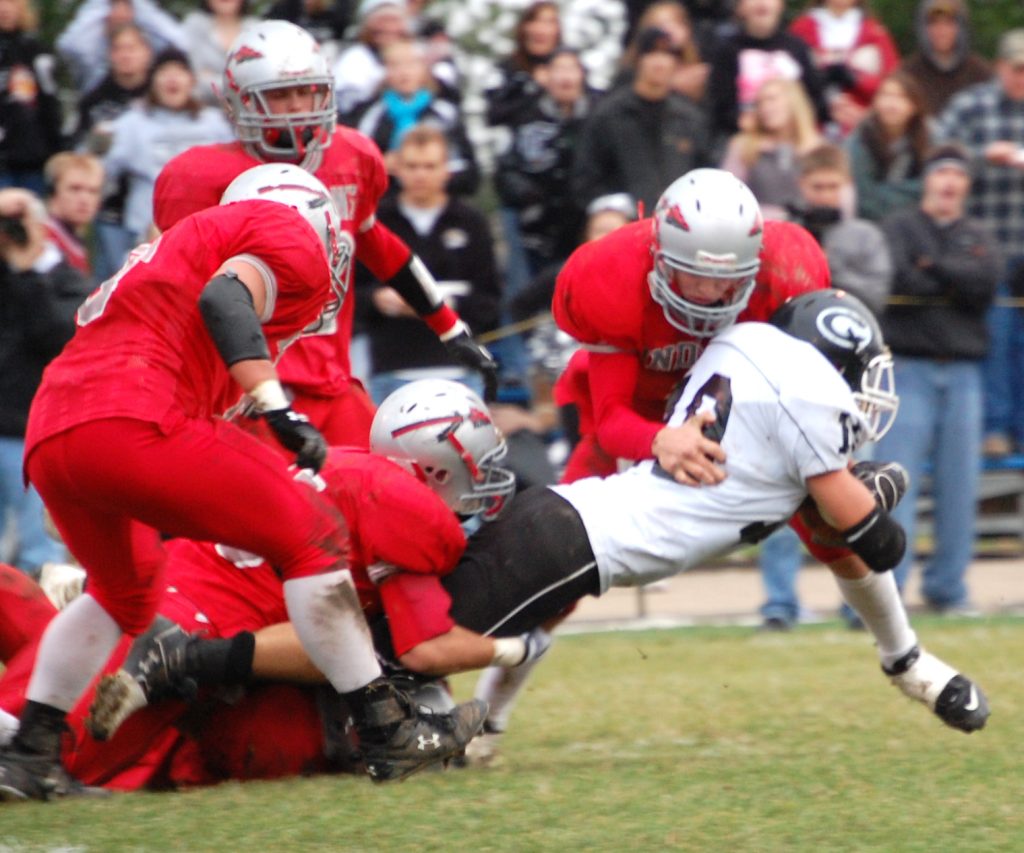 Indians Fall To No. 1 Centralia

The Clark County Indians ended another outstanding football season with a disappointing 34-6 quarterfinal loss to the Centralia Panthers on Saturday, November 14. ?Clark County closed out its 2009 season with 12-1 season record.
Centralia showed why they’ve been top-rated all season long, jumping ahead of the Indians on a 75 yard touchdown pass on their second play from scrimmage.
The Indians drove to midfield against the Panther defense before being forced to punt the ball away.
Centralia started their next drive from their own seven yard line, and drove near midfield before being stopped by the Indian defense and forced to punt.
The Indians took possession on the 28 yard line, and picked up a couple first downs against the Panthers before being driven backwards and punting the ball away.
The Panthers took advantage of a short punt and combined the option with power running to score their second touchdown of the first quarter with 1:31 remaining.  The point after kick was short, and Clark County trailed 13-0.
Centralia got another big break when Justin Alderton fumbled the ball on the 35 yard line, setting up another quick Panther score as quarterback Scott Rodgers eluded several Indian tackles and scored on an 11 yard scramble as time ran out in the quarter.  The Indians stopped the two point attempt, and trailed 19-0 after one quarter.
DJ Bunker returned the kickoff to the 22 yard line, where the Indians went to work again.  A pass interference penalty gave them a first down at the 37 yard line, and another pass to Justin Alderton put them close to a first down, but again the Panther defense held their ground and forced the punt.
The Indian defense stepped up in the next series, with Neal Moon sacking Rodgers for a big loss.  Jeremy Logsdon picked off a long Rodgers toss to give the Indian fans something to cheer about as the Indians took possession again.
But just as quickly, Centralia picked off a Justin Oilar pass, and the Panthers would drive 79 yards to score on a 26 yard touchdown pass.  This time the extra point was good, and Centralia led 27-0, which they took into the locker room for halftime.
Clark County got the b all to start the second half.  Oilar connected with Mason Owen for an Indian first down at the 38 yard line, but the Indians were again beaten back and punted the ball away.
Clark County’s defense stepped up again, shutting down the Panther offense and getting the ball back for the Indian offense.
Starting the drive on their own 16 yard line, the Indians ran a reverse to Mason Owen, who reached the 47 yard line.  Zach Alderton hauled in an Oilar pass for another first down at the Panther 35 yard line.  The Indians reached the 24 before a penalty pushed them backwards, and they turned the ball over on downs.
Again the Indian defense took charge, and again Panther QB Rodgers found himself on ground courtesy of Neal Moon, and the Panthers were forced to punt the ball to the Indian two yard line.
A pass to Owen moved the ball to the 16 yard line, but that was as far as the Indians would get.
A short punt gave Centralia great field position at the 33, but they lost control and Clark County came up with the fumble recovery at the 28 yard line.
Clark County drove to the Panther 35 before being stopped again, turning the ball over on downs early in the final quarter.
Once again, the Indian defense came through, and Clark County forced a very short Panther punt.
The Indians lined up again at the centralia 36 yard line, and drove to the Panther two yard line before a fumble ended their best scoring chance of the game.
Centralia responded, going 93 yard including an 68 yard run to score and take a 34-0 lead with 6:27 remaining in the game.
The Indians didn’t give up, and after the kickoff, Bunker carried the ball to the 45 yard line.  Oilar connected on a 55 yard touchdown pass to Ryan Whiston with 6:00 minutes remaining.  A two point attempt failed, and the Indians now trailed 34-6.
Clark County recovered the onside kick, giving them the ball and good field position, but the Panthers held their ground, taking over on downs with 5:00 minutes remaining.
Centralia drove to the Indian 12 yard line before taking a knee on both the final two plays of the contest.
Centralia nearly doubled Clark County’s offensive total 490-285 yard.