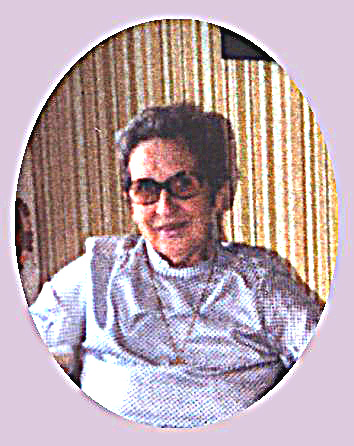 She was born September 13, 1918, in Clark County, MO, a daughter of Thomas Barton and Iva Pearl Pugh Koontz. She had been married to Clark
Whitehead and they were the parents of four children: Robert, Barbara, Bonnie
and Betty.

She was preceded in death by her parents; a sister in infancy; a daughter,
Betty Sedillo; and a son-in-law, Eddie Brewer.

Velma graduated from Wyaconda High School. She worked for Moore Business
Forms in Kahoka until it was destroyed by fire and later at Drydens and Swifts
both in Keokuk. She moved to New Mexico in 1963 to improve her health, loved it
there and it quickly became “home” to her. In New Mexico, she worked as a hotel
clerk, in production at a toy factory, and as book-keeper for the local Senior
Citizen Center.

She was affiliated with the United Methodist Church in Deming, NM. She
enjoyed growing potted plants and flowers, crocheting, and was an accomplished
seamstress. She worked hard to support her family and made the best homemade
bread. Every Friday was spent going to garage sales with friends, picking up
items for herself and for the senior center. Most of her life she owned a
miniature pincher, each of which were dear companions to her.

According to her wishes, cremation rites have been accorded. Inurnment will
follow in the Wyaconda Cemetery at a later date. Memorials are suggested to the
donor’s choice. The family is being assisted locally by Wilson Funeral Home in
Kahoka, MO.

On-line condolences may be sent at www.timeformemory.com/wilsonfh.