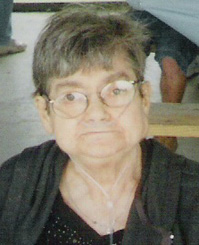 Born
October 9, 1943, at Keokuk, Iowa, she was the daughter of M. Phillip and
Lucille Rhodes Goldie. On August 6, 1965, at Denmark, Iowa, she married Gary
Louck. They later divorced.

She was
preceded in death by her grandparents and one daughter Andrea Shelton.

Linda was
a member of the Denmark Congregational United Church of Christ and the Red Hat
Society. She enjoyed playing cards, especially rummy, and her grandchildren.

Friends
may call Wednesday, January 13, 2010, at the Schmitz-Lynk Funeral Home &
Crematory in West Point from 9:00 a.m. until the time of service.

Funeral
services will be at 10:00 a.m. Wednesday, January 13, 2010, at the Schmitz-Lynk
Funeral Home & Crematory in West Point with Reverend Chad Savage
officiating.

Burial
will be in the Denmark Cemetery.

In lieu
of flowers, a memorial has been established in her memory.