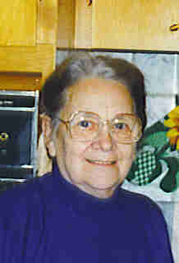 Mary R. Martin, 92, of Memphis, Missouri passed away, January12, 2010, at the
Scotland County Memorial Hospital after an extended illness.

The daughter of Ogilvie Russell and Catherine (Stephan) Parrish she was born
on April 23, 1917 in Knox County, Missouri.

In 1960 she married Forrest W. Martin in Keosauqua, Iowa and to this union
one son was born.

Mary received her education in Knox County school system. She was an avid
reader and journal writer with beautiful penmanship.

During her time of employment she worked for several places including Wells
Lamont and Edina Manufacturing Company in Edina, Missouri, NE Bell Telephone
Company of Quincy, Illinois and the Scotland County Nursing Home in Memphis,
Missouri. She also cared for elderly persons in her home for several years. Up
until the last few years she planted and maintained a large garden and took
great pride in her ability to cook and prepare meals for her family and
friends.

Mary was a faithful follower of Jesus Christ and it showed in her caring and
compassion she had for the people she worked with and her many friends and
family. She will be deeply missed by all who knew and loved her.

Memorials are suggested to the family for their discretion and can be left at
or mailed to the Payne Funeral Chapel, 202 E. Madison St., Memphis, Missouri
63555.

Arrangements were under the direction of the Payne Funeral Chapel in Memphis.