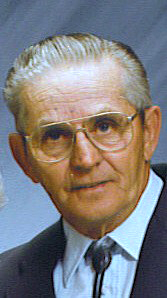 The son of E.
D. and Elsie (Smith) Frederick, he was born January 24, 1924 in Windsor,
Illinois. Dean graduated from Bible Grove High School in 1942. He married
Louise Cowell on May 31, 1944 in Memphis, Missouri and to this union four
children were born. He served in the Navy as a Seaman First Class from 1944 to
1946. Dean and Louise owned and operated a dairy farm in Bible Grove until they
retired in 1999 and moved to Memphis. Dean was a member of the Greensburg
Masonic Lodge and the Bible Grove Christian Church..

Masonic
services were conducted by the Greensburg Lodge on Saturday evening at 7:30
p.m. at the Payne Funeral Chapel in Memphis and the V.F. W. Post # 4958 of
Memphis presented the flag to the family at the close of the graveside
ceremony.

Funeral
services were held on Sunday, February 7, 2010 at 1:30 p.m. at the Payne
Funeral Chapel in Memphis. Officiating the service was Brother Larry Smith and
interment followed in the Pleasant Ridge Cemetery west of Greensburg, Missouri.

Arrangements
were under the direction of the Payne Funeral Chapel in Memphis.