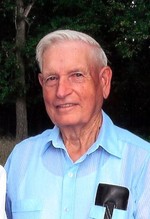 Delbert Shelton (Shelt) Golden, age 90, of Rutledge, Missouri died Monday, February 8, 2010 at the Golden Age Care Center in Centerville, Iowa.
He was born October 29, 1919 at Rutledge, Missouri the son of Manly Arlow and Cleoan Ann Allensworth Golden.
On June 16, 1946 at Rutledge, Missouri he was united in marriage to Lela “Madeline” Arehart. They spent their entire married life on their farm south of Rutledge, Missouri. She preceded him in death September 28, 2009.
Shelt attended Brick grade school and graduated from Rutledge High School in 1937.
He served four years in the United States Air Force achieving the rank of four stripe Technical Sergeant repairing plane engines. It was here he developed his love for flying which led to getting his private pilot’s license and his own plane. After his honorable discharge in 1945, in addition to working his own land, he worked a short time for the Santa Fe Railroad, helped with the construction of the Millport Bridge, worked for the Department of Agriculture and was a rural mail carrier. In October, 1964 he was appointed Post Master of the Rutledge Post Office where he served until his retirement in January 1982.
Shelt was an inspirational member of the Rutledge Baptist Church where he was a Sunday School teacher and Sunday School Superintendent. He was a member of the Rutledge School Board and the Harmony Grove Church board. He was an avid reader of Zane Grey novels.
Preceding him in death were his parents, two sisters, Lorene Skinner and Mareta Riebel; four brothers, George, Melvin, Manly Jr. and Carl Dean Golden and a grandson, Rodney.
Surviving are two daughters, Faye Graham of Centerville, Iowa and Marilyn Welsh and husband Tim of Richfield, Minnesota; three grandsons, Doug Graham and wife Sarah of Unionville, Iowa, Craig Graham of Minneapolis, Minnesota and Tony Schrech of Lenexa, Kansas; two great-grandsons, Tristan and Connor; dear friends, Mark and Mary Martin and numerous other relatives and friends.
Funeral services were held 10 a.m., Friday, February 12, 2010 at the Hudson Rimer Funeral Home in Edina, Missouri. Reverend Steve Jarvis officiated the service. Burial was in the Pauline Cemetery in Rutledge, Missouri.
Memorials in honor of Shelt Golden may be made to the American Kidney Foundation or the Rutledge Baptist Church and may be left at or mailed to the Hudson Rimer Funeral Home, P.O. Box 1, Edina, Missouri 63537 www.hudsonrimerfh.com
HUDSON-RIMER
FUNERAL HOME