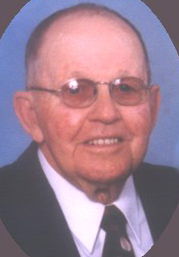 J. Dean Wood, age 88, of rural Canton, MO, died Tuesday, March 9, 2010, in River Hills Village in Keokuk, IA.
Joseph Dean Wood was born on March 25, 1921 on the family farm near Peaksville, MO, the youngest son of Joseph Baird and Clara Georetta Barrows Wood.
On May 18, 1950 he and Ruby Pauline Hunziker were married in Springfield, Mo by Rev. Hugh Isabell.
Dean graduated from Revere High School in 1939. After high school he trimmed trees around the Midwest. He was a veteran of World War II having served in the Japanese theater. His unit was one of the first units to arrive in Japan after the atomic bombing.
After the war, Dean and his brothers operated a Sinclair service station in Kahoka. He then worked at Keokuk Steel Casting in Keokuk until 1966 when he and Pauline bought the business that they would name Wood’s Packaged Liquor and Fireworks. They would serve the public until 1992 when they closed the station. They continued to run the fireworks business until 2007 when the new road was opened and the old Highway 61 was closed. Dean felt the best part of the business was meeting the public and sharing in their life experiences. It was said that many a problem was solved over a cold bottle of soda pop while standing around and loafing.
He is survived by his wife of almost 60 years Pauline, son Ronnie (Ryanne) of rural Canton; daughters Connie (Steve) Cloud of Mt. Zion, IL and Trudy (Michael) Tanner of Sleepy Hollow, IL; six grandchildren, Brendan Hammel of rural Canton; Brandon (Linda) Cloud of Springfield, IL; Justin (Nicki) Cloud of Bloomingdale, IL; and Austin, Carson and Olivia Tanner of Sleepy Hollow, IL; sister-in laws Nettie Bash of Murphreesboro, TN, and Lois Hunziker of Kahoka, MO, and brother-in-law Earl (Gladys) Hunziker of Hamilton, IL, nieces, nephews and other relatives.
He was preceded in death by his parents and brothers, Dale (Tina) and Stuart (Alberta).
Funeral services were held Friday, March 12, 2010 at 10 a.m. at Wilson Funeral Home in Kahoka with Pastor Shawn McAfee officiating. Special music was recordings “How Great Thou Art” and “Sentimental Journey”.
Pallbearers were the grandchildren: Brendan Hammel, Brandon Cloud, Justin Cloud, Austin Tanner, Carson Tanner and Olivia Tanner.
Burial with full military honors followed in the Kahoka Cemetery.
Visitation was held after 9 a.m. Thursday at Wilson Funeral Home with family receiving friends from 6-8 p.m.
Memorials were suggested to the Peaksville Christian Church.
On-line condolences may be expressed at www.timeformemory.com/wilsonfh.

Acknowledgement of Service
The members of the American Legion and the Veterans of Foreign Wars hereby acknowledge that Comrade Joseph D. Wood served our country for two years and one month in the U.S. Army.
He served with Company F, 334th Infantry Division as a truck driver light, and attained the rank of T/5.
He served in the Luzon Campaign. He is authorized to wear the following decorations: Asiatic Theater Ribbon with One Bronze Battle Star, Philippine Liberation Ribbon with One Bronze Battle Star, Victory Medal, Good Conduct Medal, Army of Occupation Medal-Japan, Combat Infantry Badge, and Three Overseas Bars.
He received an Honorable Discharge 19 November 1946, and returned to Clark County, Missouri.
Our Comrade joined the staff of the Supreme Commander 9 March 2010.