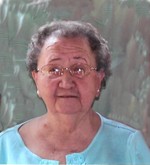 Norma Lee Spath, age 86, of Quincy, Illinois, formerly of LaBelle, Missouri, died Thursday, March 11, 2010, in the Blessing Hospital in Quincy, Illinois. She was born in Marion County, Missouri on July 13, 1923, the daughter of Edward and Anna Wehmeyer Schaller. She was united in marriage to Robert J. Spath on January 4, 1941, in Marion County and he preceded her in death on July 6, 1983.
She was also preceded in death by her parents, two brothers, Carl and Raymond Schaller, one sister, Lorene Oberdahlhoff, and one half brother Verle Schaller.
Surviving are three daughters, Beverly Frese and husband Tom of Quincy, Illinois, Donna Thomas and husband Clark of Columbia, Missouri, and Amy Miller and husband Ted of Quincy, Illinois, three half brothers, Lorlen, Eldridge and Sidney Schaller, eight grandchildren, Jody James, Brian Frese, Lynn Barlow, Michelle Staddler, Traci Thomas, Tammy Baumgartner, Kelly Dyer, Shawn Middendorff, seventeen great grandchildren and several nieces, nephews and cousins.
Norma received her education in Marion County rural schools. She was a housewife and homemaker. Norma lived in LaBelle from 1941 to 1963 during this time she worked at Kresge’s in Quincy, Illinois. She then lived in Quincy, Illinois, where she cooked at Woolworths. She later moved to Fowler, Illinois where she was employed as a cook for Fowler Grade School.
For the past several years she has resided in Quincy, Illinois. Norma enjoyed flowers, cooking, and spending time with her family. She was a past member of the Loyal Order of the Moose in Quincy, Illinois, a fifty-year member of the LaBelle Eastern Star Chapter # 316, and a member of the LaBelle Christian Church.
Funeral services were held 2 PM Monday, March 15, 2010, in the Coder Funeral Chapel in LaBelle, Missouri. Reverend Maynard Blackwood officiated the services. Burial was in the Lewistown Cemetery. Music was provided by Amanda Frese singing “Amazing Grace” and a recorded selection by Alan Jackson “Sissy’s Song” Casket bearers were Brian Frese, Tom Frese, Clark Thomas, Ted Miller, Jerry Schaller, Bobby Oberdahlhoff. Visitation was from 4 p.m. to 6 p.m. on Sunday, March 14, 2010, at the Coder Funeral Chapel in LaBelle, Missouri. An Eastern Star Service was held at 6 p.m. in the Chapel conducted by LaBelle Eastern Star Chapter # 316. Memorials may be made to Sunset Home in Quincy, Illinois. Memorials may be left at or mailed to Coder Funeral Home, P.O. Box 151, LaBelle, MO 63447.