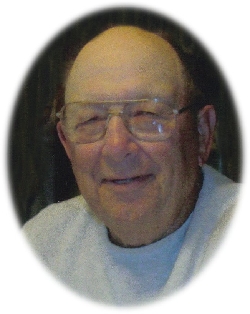 Charles L. “Windy” McFarland, 78, of rural Baring, Missouri, died Friday, March 19, 2010 at the Boone Hospital Center in Columbia, Missouri after a brief illness.
Charles was born on July 15, 1931, in rural Baring, Missouri, the son of Wilber T. and Opal E. Hustead McFarland.
Windy was raised in the Greensburg Community and attended Fabius Rural School, Baring Elementary and graduated from the Memphis High School in the Class of 1949. He began farming with his father, where they operated a dairy farm for 25 years. He was born and lived his entire life on the Centennial Farm east of Greensburg, Missouri.
On July 5, 1953, at the Methodist Church in Edina, Missouri, Charles married Joann Brees and she survives of the home.
Windy was an avid bowler, bowling for many years in several leagues. He loved hunting, particularly quail hunting and his hunting dogs. He was a member of the Greensburg Baptist Church and the Greensburg Masonic Lodge #414, where he received his 50 year membership recognition.
Windy and Joann retired from farming and enjoyed traveling around to craft fairs and county fairs and festivals, selling sweat shirts and t-shirts, in Missouri and surrounding states where he loved to visit with people and meet friends, old and new.
Windy is survived by his wife of 56 years, Joann McFarland of Baring, Missouri; a sister, Nadine Hardy of Iowa City, Iowa; sister–in-law, Bonnie McFarland of Davenport, Iowa; sister and brother-in-laws, Bonnie and Roland Switalski of South Bend, Indiana; cousins, Loraine Walker of Fairfield, Iowa, Lee Suter and Kenneth Suter both of Wyaconda, Missouri; sixteen nieces and nephews, and his beloved dog, Pearl.
He was preceded in death by his parents, Wilber McFarland in 1974 and Opal McFarland in 1967; two brothers, Wendell McFarland and Donald Earl McFarland in infancy; sisters and brothers-in-law, Iris and William Moore, Dorothy and Robert Snell, and Helen and John McElfresh.
Funeral Services were Monday, March 22, 2010, at the Doss Funeral Home in Edina, Missouri. Burial will be in the Pauline Cemetery at Rutledge, Missouri. Reverend Sam Smith officiated and music was provided by Nancy Reardon and Brent Karhoff. Casket Bearers were Randy Snell, Paul Copenhaver, Steve McFarland, Lonnie Boyles, Jordan Crookshank and Jim Taylor, along with Honorary Bearers, Earl Kapfer, Max Kapfer, Don Woodward, Ralph Johnson and Steve Magruder.
An expression of sympathy, in memory of Charles “Windy” McFarland, may be left to the Pauline Cemetery. A memorial may be left at or mailed to the Doss Funeral Home 208 N. 4th Street, Edina, Missouri 63537.