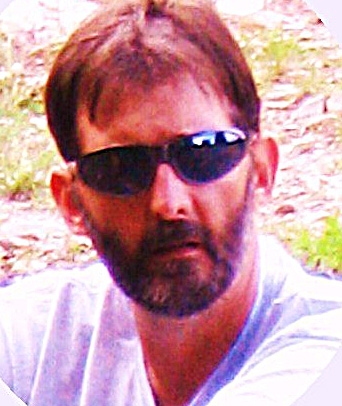 Houston Ray Rains, age 45, of Kahoka, MO, died peacefully Sunday, March 28, 2010 at his home following a long battle with leukemia and other complications.
He was born August 11, 1964 in Many, LA, the son of Johnnie and Peggy Robertson Rains. His father died when he was seven and he was blessed with a stepfather who loved him as if he were his own.
On November 23, 1984 he was married to Cindy Morton in Shreveport, LA. In December of 1986 he adopted her children, Jason and Haley, to love and raise as his own.
He is survived by his wife, Cindy, of Kahoka; two sons, Jason Ray (Samantha) Rains of Sierra Vista, AZ and Orie Ray Rains also of Sierra Vista; a daughter, Haley Rae (Dave) Shrum of Macon, MO; eight grandchildren: Judges, Jericho, Josiah and Job Rains and Trey, Tristan, Trevin and Trinity Shrum; parents, Peggy and Jerry Baker of Florien, LA; his grandmother, Bertha Hopkins of Many, LA; his wife’s parents, Shirley and Marty Mills of Kimberling City, MO; two step brothers, Jay (Brenda) Baker and Wilson Baker both of Louisiana; one step sister, Mary (Bradley) McDonald and a half sister, Joyce (Dale) Warren, all of Louisiana;  brother-in-law and sisters-in-law: Jerry (Kay) Morton of Woodstock, IL, Betty Morton of Many, LA, and Phyllis Morton of Minden, LA; nieces, nephews and other relatives; as well the numerous children who passed through their doors and entered their lives through their work of twenty years with Cookson Hills and Shiloh ministries.
He was preceded in death by his father; grandparents, Houston Rains and Benny and Eula Robertson; and two brothers-in-law, Tom and Mike Morton.
Houston graduated from high school in Shreveport, LA and later from Nashville Auto Diesel College in Nashville, TN.
Following his marriage to Cindy, they devoted their life to the ministry of caring for children. They were house parents with Cookson Hills Christian Ministries in Moutain View, MO from 1987-1991 and with Shiloh Christian Children’s Ranch in Clarence from 1991-1996 and at Kahoka from 1996-2007 when Houston’s health began to fail. He was treasurer of the founding school board of Tri-City Christian School at Macon. He lived his live serving his Lord and showing some children the only caring and love they would ever know. He was a faithful servant to the end.
A Celebration of Life memorial service was held Thursday, April 1, 2010 at 5:30 p.m. at the New Testament Christian Church in Keokuk, IA.
Memorials in lieu of flowers were suggested to National Marfan Foundation, Shiloh Christian Children’s Ranch or the American Cancer Society (Kahoka State Bank Relay for Life team) and may be left at the church or sent to Wilson Funeral Home, P. O. Box 199, Kahoka, MO 63445 or to the family home.
On-line condolences may be expressed at www.timeformemory.com/wilsonfh.