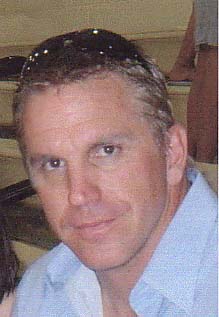 Christopher Glenn Bishop, age 42, of Phoenix, AZ died April 7, 2010. Chris was a loving father, husband, son, brother and true light to all that had the privilege to know and love him.
Chris was preceded in death by his mother Judy.
Chris is survived by his three beautiful and amazing daughters, Brielle 14, Cierra 12 and Madison 9, his wife Tina, father Dan and wife Judi, siblings Laurie and Jerry, sister in law Shirley, nephew Cody and countless friends and extended family.
A native of Phoenix, Chris attended St. Agnes Grade School and St. Mary’s High School. Chris was a Sergeant in the United States Marine Corps for a number of years. Besides the birth of his daughters one of Chris’ proudest moments was when he became a Firefighter with the Phoenix Fire Department in September of 1996. In Chris’ own words “that is the one place I felt at ease with myself. I knew I was in the right place and I looked forward to going to work everyday. I am proud to be a Firefighter”. Chris was an avid outdoorsman and sports fanatic, in the recent year was training and competing in triathlons and was a member of the Anthem Triathlon Club, he excelled in everything he did and had a passion for being active. Chris’ light will shine on in the hearts of all that knew and loved him.
A celebration of Chris’ life will be held Tuesday April 13th at All Saints’ Episcopal Church, 6300 N. Central Ave. Greetings with the family from 11am-Noon with Services at Noon. Reception to follow at the FOP Lodge, 12851 N. 19th Ave.
In lieu of flowers the family requests donations in Chris’ honor and memory to the United Phoenix Firefighters Association Charities, 61 E. Columbus, Phoenix, AZ 85012 or to the charity of your choice.