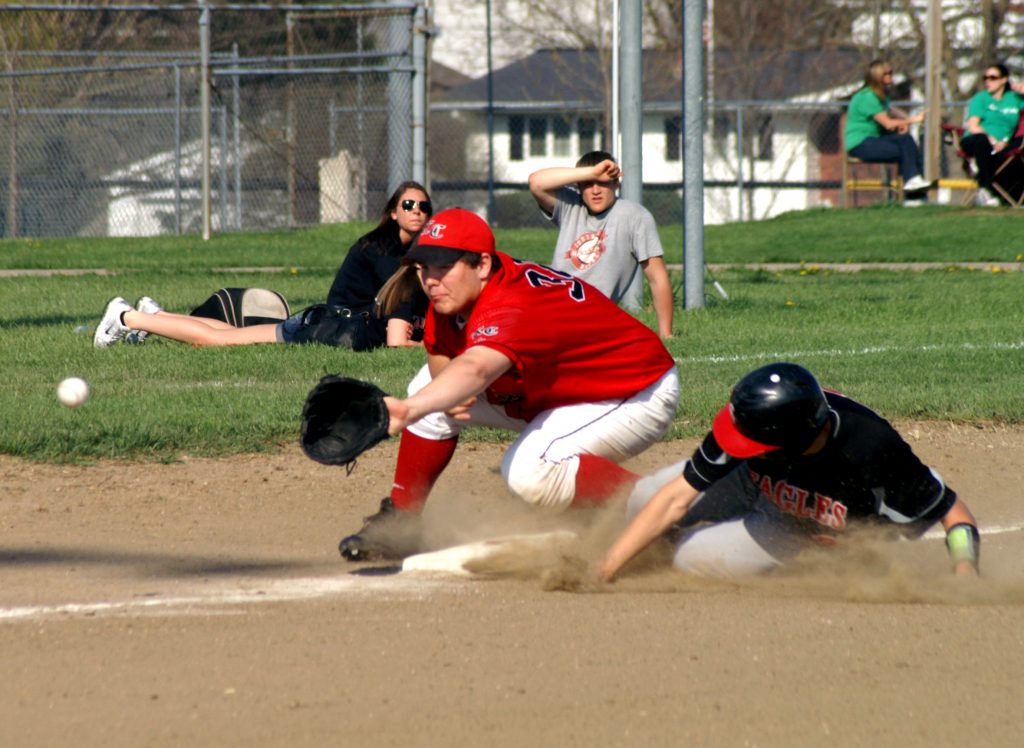 Southern Boone County scored two first inning runs in an April 14 Westran Tournament game with Knox County and went on to a 7-1 victory. Knox County (2-5) held their own against an outstanding opponent.
The Northeast Missouri Eagles stranded nine runners and rapped out seven hits.
Dylan Morgret singled with one out in the top of the first inning. Powerfully built lefty Dyllon Harper picked Morgret off first base with a sharp looking move.
Harper struck out five men and walked four in 4 1/3 innings pitched for the win.
Freshman Colton Danger had a hit sandwiched between two walks in the KCHS second inning. Knox County left the bases loaded, stranding six in the first three innings.
Knox County made their share of mental mistakes on defense. The local Eagles allowed SOBOCO standout Adam Brush to steal home for the second run of the opening inning.
Adam Brush led Southern Boone with a 2-4 day with two runs scored and another batted in. Brush led off the third inning with a double. Brendan Sapp lofted a sacrifice fly, scoring Adam Brush with the third Eagle tally.
Knox County fielding errors allowed Augie Begemann to score Southern Boone’s fifth run in the fifth inning off relief pitcher Brock Couch. Starting pitcher Lance McMahon struck out the first two men in the Eagle fourth inning.
Ryan Schuermann doubled and later scored the fourth SOBOCO run on a fourth inning error. Lance McMahon pitched four innings with four strikeouts and six hits. Three of the five runs off McMahon were earned.
Knox County pressured the Southern Boone defense in the third inning. Keanan Kite beat out an infield error. Tristan Lonberger singled with two down before Dyllon Harper got out of the inning unscathed.
Three sixth inning walks set up Ryan Schuermann for a two RBI single rounding out the score. Southern Boone County scored seven times on seven hits and one error. The Eagles stranded six runners.
Knox County chased the SOBOCO starter from the mound during the fifth inning. Jared Barnard singled in the KC fourth but was picked off first base.
Dylan Morgret stroked a one out hit in the fifth inning.  Cameron Morford doubled sending Eagle runners to second and third base. Keanan Kite drew a bases loading walk.
Tristan Lonberger lofted a sac fly, scoring Dylan Morgret. Southern Boone was able to end the threat by doubling a runner off on the fly ball.
Dylan Morgret led Knox County offensively with a 2-3 day at the plate and a run scored. Six Knox County players had at least one base hit. Kyle Townsend finished up on the mound for the Ashland, Missouri Eagles. Townsend fanned five batters with one hit in 2 2/3 innings pitched.
“We came out ready to compete,” Knox County coach Jesse Crawford said. “Lance McMahon threw strikes. He got ahead and got batters out. We competed with them. We left nine runners on base. If we don’t do that, we have a shot to win.”
“We are getting better each time out. We have a couple of conference games this week. When you get to see what baseball is like at the Class 3 and Class 4 level it’s good for us,” said Crawford.
“It’s good to see the product we are trying to get on the field. Mentally we are a little hurt right now, but this doesn’t injure us in the long run,” said Jesse Crawford. “We will be stronger next week and hopefully get a couple of wins.”