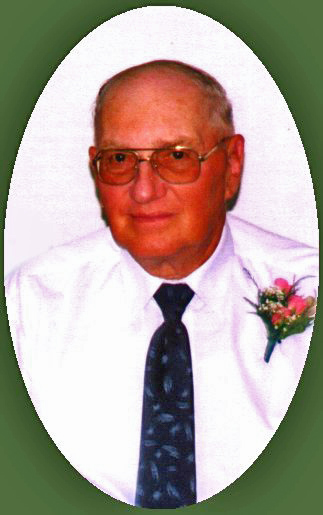 Joe was born September 6, 1933 to Joseph Benjamin and Zella E. Sells Kerr at
their family home north of Luray. He was preceded in death by his parents.

Joe graduated from Luray High School in 1951. On April 3, 1954, he married
Esther F. O’Brien at the Luray United Methodist Church. He was inducted into the
service in 1953 and served in the U. S. Army until June of 1955. Joe farmed all
of his married life and for over 30 years was a rural mail carrier in the Luray
and Wyaconda areas. He also owned “Joe’s Gun Shop” which started out as a hobby
and a place for conversation. He was an active member of the Luray United
Methodist Church, former member of the Luray School Board, and member of
National Rifle Association, Quails Unlimited, Fairmont Coon Hunters Association,
Wyaconda Lion’s Club, and St. Francisville Lodge # 588, A.F. & A.M. In
earlier years, he was active as leader for 4-H and Methodist Youth
Fellowship.

As a mail carrier, Joe didn’t just deliver mail but also became a caretaker
of people on his route. He genuinely cared for each of them, watched out for
them and checked on them regularly. Joe would get up early many mornings to fish
and deliver his fresh catch to people on his route that were unable to fish
themselves. He also would provide mail boxes to those who couldn’t afford
them.

One of his passions was fishing. Many friends and family gathered annually
for the large fish fry that he and Esther would host. He taught his grandkids to
fish the moment they were big enough to get in the boat. Joe was a man of great
faith, caring for others along his journey, and treasuring those he met.

Joe was known for his “Yellow Pages” which he wrote on his yellow legal pad.
His “Pages” were a blessing to all who were a subject and to those who heard
them.

Funeral services were held Monday, April 19, 2010 at 10:30 a.m. at the Luray
United Methodist Church with Rev. Beryl Cragg and Mr. Tom Lemons officiating.
Mrs. Bonnie Vineyard was organist with congregational hymns “How Great Thou Art”
and “Till We Meet Again”.

Burial with full military rites followed in the Combs Cemetery.

Visitation was held at Wilson Funeral Home in Kahoka after 10 a.m. Sunday
with family receiving friends from 2 to 4 p.m.

Memorials were suggested to the Luray United Methodist Church or Combs
Cemetery.