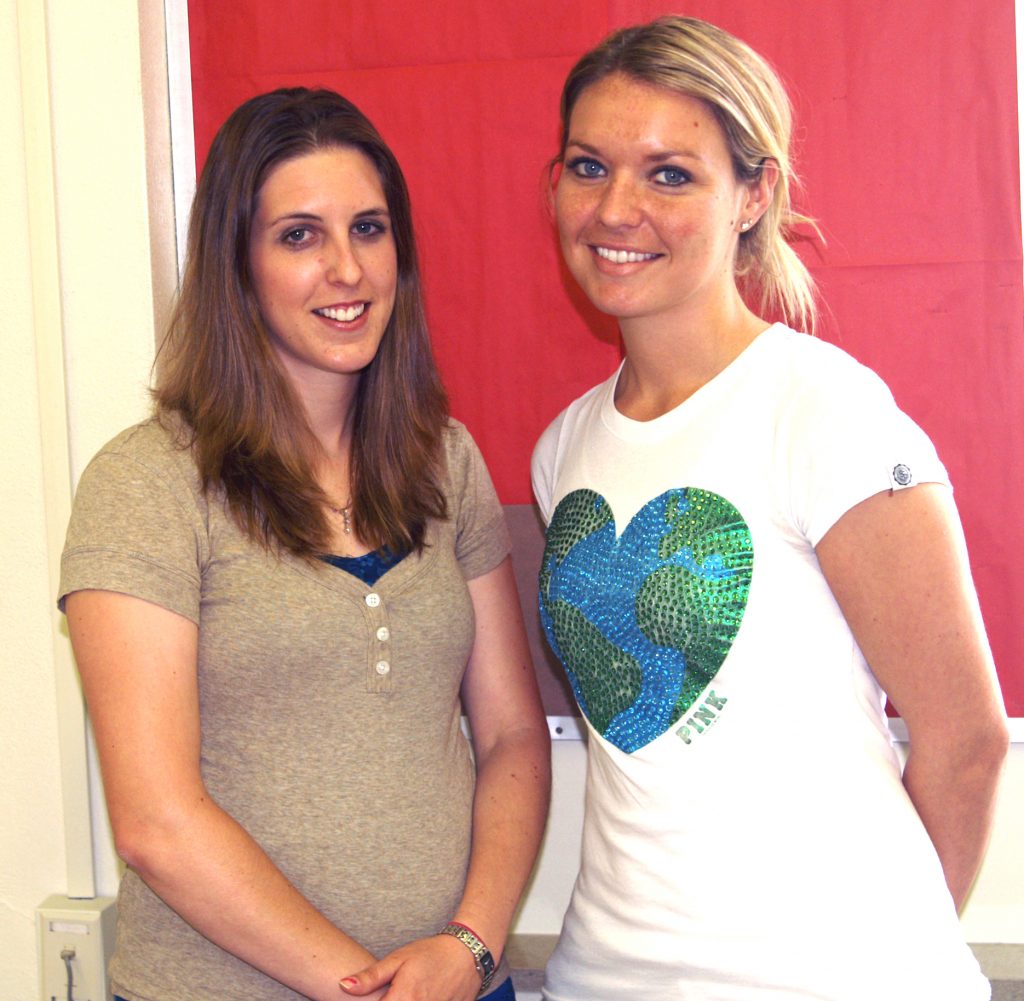 High School assistant baseball coach Jarod Lovell has been offered the 2010-11 head baseball coaching position. Former KC Middle School assistant, and Lady Eagle softball standout Marcie (McMahon) Stansberry has been offered the head softball job for the upcoming school year.
Lovell and Stansberry indicated to the Edina Sentinel that they would accept the offers. According to the minutes of the May 18, 2010 Knox County R-I Board of Education Executive Session,
Jake Hemmerling has been offered the high school assistant baseball coaching position.
Knox County Elementary School second grade teacher Lisa Clark has been offered the high school assistant softball coaching job. Coach Clark told the Edina Sentinel that she plans to accept the offer. The Edina Sentinel has not been able to contact Mr. Hemmerling at press time.
Marcie Stansberry and Lisa (Leathers) Clark were two of the best high school softball players in Northeast Missouri in their playing days. Coach Stansberry was a four year college softball starter. Stansberry began her college softball career at Merrimac Community College in the St. Louis area.
Marcie McMahon transferred to Columbia College where she played three seasons with sister Katie McMahon. Merrimac and Columbia College were national playoff teams.
“I’m really excited about (assuming the head coaching position). I think the biggest challenge will be getting them mentally prepared,” Marcie Stansberry said about her new challenge.
“We have more talent than any high school coach could possibly ask for. They are still really young,” Stansberry said. “I think if we can overcome our struggles mentally and fine tune our physical abilities that we will be in fine shape.”
Knox County went 11-6 in varsity softball last season. Marcie Stansberry takes over from Stephanie Crawford, who resigned after last season. Marcie Stansberry and Allen Garrett coached the current Lady Eagle sophomores and freshmen to a 14-2 record when they were in Middle School.
Knox County’s girl’s softball program will enter their 2010 season with perhaps the highest expectations of any team in the district. “I think we can meet (expectations). Lisa (Clark) and I both played college ball, so we know what it is like to play against high level competition,” related Marcie Stansberry.
“We know how to prepare for tough game situations. We are on the same page. We have a lot of good ideas,” said Stansberry. “We are pretty confident we can play with the best of them.”
Marcie Stansberry is employed by the Knox County R-I school district as a freshman tutoring/mentoring and ISS employee for the upcoming year.
Lisa Clark was the 2009 Knox County Middle School head softball coach. Former Lady Eagle softball player Becky (Schrage) Barnhill was named the Knox County/Brashear middle school softball coop head coach for the upcoming year. Megan Hines will return as middle school softball assistant coach.
“We have developed a good relationship with the players and their parents as well,” Marcie Stansberry said when asked about the continuity factor.
Becky Barnhill is set to coach the KCHS seventh grade girls’ basketball team. Marcie Stansberry will coach the Lady Eagle eight grade. Allen Garrett and Scott Wolter have been offered the KCHS boy’s basketball coaching reigns.
Lisa Clark graduated from Macon High School in 2003. Coach Clark played softball at Hannibal LaGrange College after transferring from Moberly Area Community College.
“They know how to play the game. It’s just fine tuning their physical skills and knowing what to do in any situation,” said Lisa Clark. “Part of what I am going to like about coaching high school ball is the strategy. We played some pretty intense games in high school,” said the former Lisa Leathers of the always tough Clarence Cannon Conference softball league.
Highland and Palmyra have won four of the last five Class 2 softball state championships. “We played a 16 inning game (at Macon HS). We played a lot of extra inning games. It was very high level, high stress competition. I love those situations. I think it will be really fun.”
Macon HS graduate Alex VanDelft has been offered the head football and track coaching jobs for the upcoming season. Roger Parton was offered the high school girls’ Assistant Coaching job under John Weaver. The Lady Eagles will defend their 2010 unbeaten conference championship in 2010-11.
Anna Schmidt was offered the 2011 Head Middle School track job. Megan Hines was offered the MS assistant track and field job. Diane Tucker and Joyce Delaney were offered the High School Campus Bowl coaching positions.
Knox County will defend their district championships in football and Campus Bowl. Clarissa Brenizer will coach the KCMS football and high school basketball cheerleaders.
Alicia Myers will be the Eagle JV football and high school Dance Team coach.
Jarod Lovell was elevated to the head varsity baseball coaching position. Lovell was an assistant coach under Jesse Crawford during the 2010 baseball campaign. The Eagles were 6-16 in baseball in 2010.
“I got a lot of experience this past season,” Jarod Lovell said. “It’s going to be fun. “I have got to work with a lot of the middle school athletes who are going to be freshmen next season. I would like to see more summer baseball opportunities for our high school athletes.”
“I know there are summer baseball programs for our Middle School players and I am happy to see that,” said Coach Lovell. “I would like to help get that going for us. I think that can only help the program in the future.”
Jarod Lovell teaches Middle School math at Knox County R-I.
In order to accept their current positions, the Board accepted resignations from John Weaver as the Head Middle School football coach and from Jarod Lovell as assistant baseball coach.
John Weaver accepted an assistant high school football coaching job for the upcoming school year.