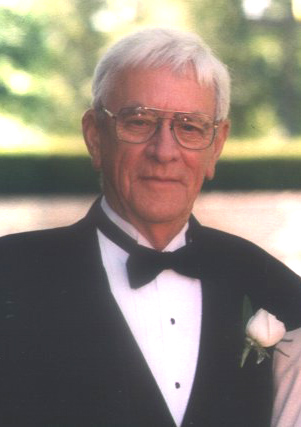 Keith C. Nixon, 83, of Kahoka, died Saturday, June 26, 2010, at 8:12 p.m.. at Blessing Hospital in Quincy, IL.
He was born May 10, 1927, in rural Clark County to Arthur James and Merle Caldwell Nixon. On August 4, 1957, he was united in marriage to Janet LaNet Shankster at St. Paul United Church of Christ in Kahoka. She survives.
Keith was a 1945 graduate of Revere High School and served his country in the US Army where he received a World War II Victory Medal. He was a member of the Herman Blum Post # 192, American Legion, St. Francisville Lodge # 588, A.F. & A.M., Clark County Moose Lodge # 1432 and American Society for the Prevention of Cruelty to Animals.
Keith worked all his life before retiring as the Clark County Circuit Clerk and Recorder of Deeds where he served for 12 years. He received several government commendations upon his retirement in 1994. He loved farming with his brother Carroll and nephew Kevin on their farms north of Kahoka. Keith enjoyed spending time with his loving family and anyone who knew Keith knew he adored his very devoted dog, Spencer. Keith was a good and honest man who had a strong belief in God. He was a long-time member and past consistory president of the St. Paul United Church of Christ in Kahoka.
In addition to his wife of almost 52 years, he is survived by his daughters Kristy Webber and her husband, Jerry, of Kahoka, Kim Daniel and her husband, Tony, of Kahoka, Kelly Hirtzer and her husband, Rodney, of Memphis, TN and a son, Douglas Nixon and his wife, Lisa, of Chesterfield, MO. He is also survived by his only brother Carroll Nixon and his wife, Opal, of Kahoka; sister-in-laws Patricia Stubbs and her husband, Chuck, of St. Louis, MO and Janese Davis and her husband, Gene, of Burlington, IA. He will be missed by his seven grandchildren: Kristin and Carrington Daniel, Schuyler and Kayli Lovell, and Samuel, Lily and Sophia Nixon and four step-grandchildren: Walter and Donald Webber and Victoria and Clint Hirtzer as well as several nieces, nephews and cousins.
Keith was preceded in death by his parents Arthur and Merle Nixon and his in-laws, Ralph and Edna Shankster.
Funeral services were Tuesday, June 29, 2010 at 10:30 a.m. at St. Paul United Church of Christ in Kahoka with Pastor Jim Campbell officiating and words of comfort by Jerry Webber.
Mrs. Ida Ross was organist. Selections were “You’ll Never Walk Alone” and “Go Now In Peace”, by H L Plenge and recording “When I Get Where I’m Going”.
Honorary pallbearers were Donald Dieterich, Keith Zinnert, E. Richard Webber, Delbert Huckey, Junior Stutz, Gary Dial, Bill Ramsey, Daryll Calvert, Mary Jones and Kent Martin.
Pallbearers were Jerry Webber, Tony Daniel, Rodney Hirtzer, Schuyler Lovell, Sam Nixon, Carrington Daniel, Eric DeRosear and Kevin Nixon.
Burial with military rites followed in St. Paul Cemetery.
Visitation was held after 11:00 a.m. Monday, June 28, 2010, at Wilson Funeral Home in Kahoka with family receiving friends from 6-8 p.m. and Masonic Services following at 8 p.m.
Memorials were suggested to the Clark Co. Local Cancer Fund or St. Jude’s Children’s Hospital.
On-line condolences may be expressed at www.timeformemory.com/wilsonfh.