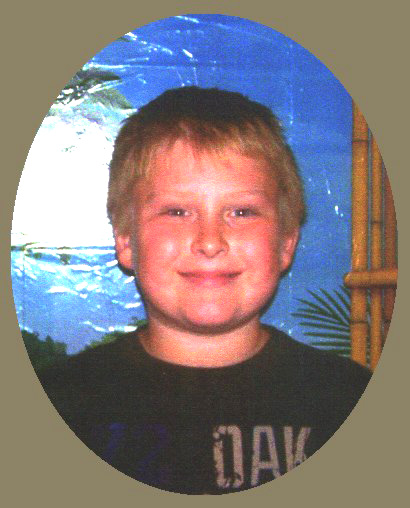 He was preceded in death by his brother, Jimmie Bass IV in October, 2009, and
an aunt, Michelle Bass.

Derrick would have been in the 5th grade this fall at Blackhawk
Elementary and was a very gifted student. He was his grandpa’s shadow and loved
working and doing things with him. He played the guitar and would perform on
stage with his family at different festivals they attended. He was a typical boy
who loved peanut butter, fishing, hunting and playing his D.S.

Funeral services were held Wednesday, July 21, 2010, at 10:00 a.m. at the
Wayland United Methodist Church with Pastor Ray Gilbert officiating. Mrs. Bev
Laffoon and Mrs. Lynn Summers were instrumentalist. Selections were recordings
“His Eye is on the Sparrow” and”Folsom Prison Blues”.

Friends could register between the hours of 9 and 5 on Tuesday at Wilson
Funeral Home.