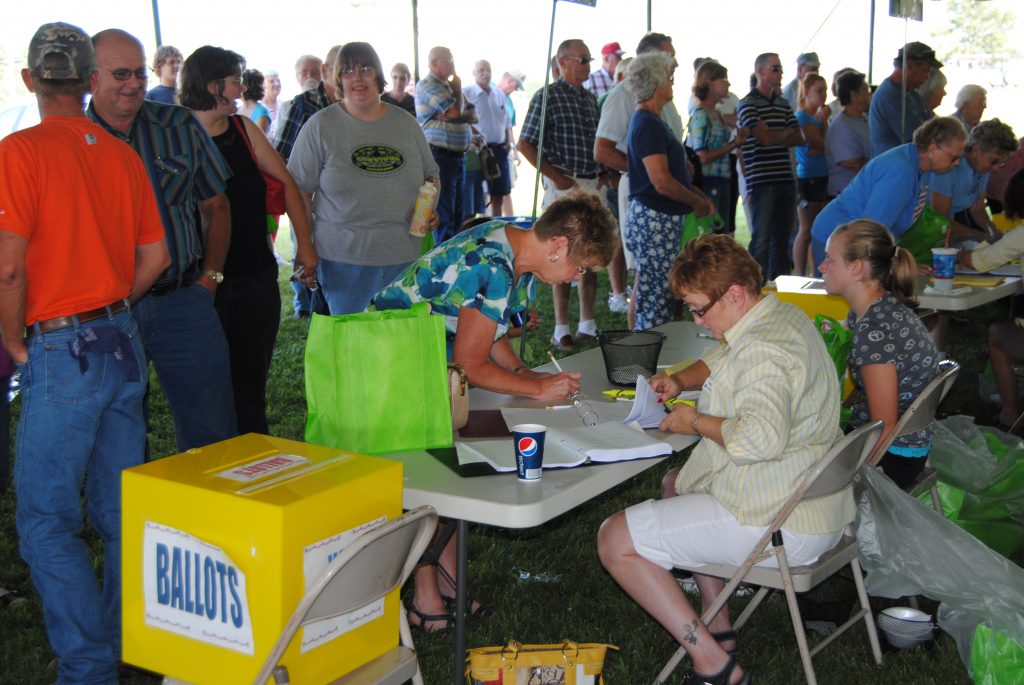 “It’s a wonderful evening for this event. I’ve been praying for months that we would have weather like this for tonight’s meeting”, Travis Mathes told members of the Lewis County Rural Electric Coop as they gathered for an evening meeting under the big top tent in the front yard of the Knox County High School on August 5, 2010 to celebrate the 73rd Annual Meeting of the members.
Emery Geisendorfer Jr., President of the Board of Directors, called the meeting to order. Larry Clark Secretary/Treasurer of the Board of Directors gave an update on the financial status of the cooperative. John Bloom, General Manager/CEO presented service awards to employees and directors and then took those in attendance on a trip through time by talking about how times have changed since the first line was energized at Lewis County REC. He also gave some insight into the challenges the electric industry faces in the future.
“Things seem to be stabilizing, and we’re a little more optimistic,” Bloom said.
Representative Brian Munzlinger and Senator Wes Shoemyer were present to update members on legislation at hand.
There were 332 members registered to vote. The members elected three directors to serve a 3-year term to expire in 2013. Elected to the board were DeWayne Selway, Williamstown, Bill TenEyck, Lewistown, and Larry Clark, Edina.
Kami Mohn performed and there were free children’s games. Attendance prizes were given and there were other drawings for prizes throughout the evening. The grand prize winner of a $400 energy certificate was Amy Smith, and the child’s grand prize, an electric scooter, was won by Jade Daniel and his little brother Gage.
Mark your calendars, next year’s Annual Meeting will be held on Thursday evening, August 4, 2011 at the Lewis County fairgrounds.